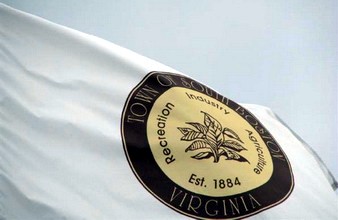 image located by Valentine Poposki, 8 January 2008
based on an image at www.waymarking.com/

South Boston is a town in Halifax County, Virginia, United States. The population was 8,491 at the 2000 census.

History:
On December 8, 1796, the General Assembly authorized eight commissioners to establish at Boyd's Ferry on the south side of the Dan River the town of South Boston, named for Boston, Massachusetts. Because this site proved vulnerable to flooding it was eventually abandoned in favor of a new settlement on the north side. By the 1850s the Richmond and Danville Railroad passed through South Boston, which eventually developed into an important market for brightleaf tobacco. In 1884 it was incorporated as a town; in 1960 it became an independent city by court order. South Boston became a town again and rejoined Halifax County on June 30, 1995." - from Wikipedia: en.wikipedia.org/wiki/South_Boston,_Virginia.

A photo of the town flag can be seen in Waymarking site: www.waymarking.com

On town website you can also see the city banner: www.southboston.com.