The Veteran Exempts flag was used in the War of 1812 at the Battle of Plattsburgh, New York.
Clifton Barrette, 25 October 2000

The Veteran Exempts, commanded by a Captain Melvin L. Woolsey, was a local New York militia company, formed in July of 1812, which was made up of veterans of the American Revolution who were otherwise exempt from military service because of their age. This Veteran Exempts flag may have been used at the Battle of Plattsburgh in upper New York, but no documentation exists that it was in fact used. The Battle, also known as the Battle of Lake Champlain, ended the final British invasion attempt of the northern United States during the War of 1812. Fought shortly before the signing of the Treaty of Ghent, the American victory denied the British leverage to demand exclusive control over the Great Lakes and any territorial gains against the New England states. Little other information is available on the flag or activities of the Veteran Exempts during the War of 1812.
Pete Loeser, 6 August 2011 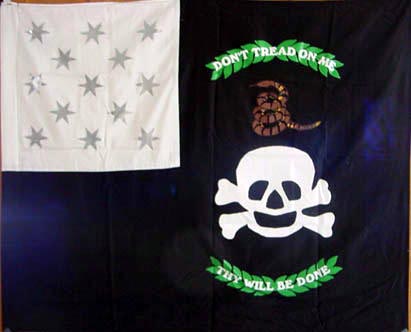 While doing research on the Battle of Plattsburgh with my Order of the Arrow Scouts for their Historic Trail, we contacted the curator of flags in Albany, New York and he said the Veteran Exempts flag was probably originally silk and hand painted. I had two flags made from silk and silk-screened from the description appearing in the Plattsburgh NY Republican (31 July 1812, p. 2) for re-enactors to fly from their boats at the reenactment battle during the 2006 Battle of Plattsburgh Celebration. Both these replica flags are now at the Battle of Plattsburgh Interpretive Centre.

The Veteran Exempts flag was described as having: a black ground with 13 stars for the Union of White wrought in silver. That in the center of the flag there be a Death's Head, with cross bones under...Under these an open wreath, with this motto, "Thy will be done." Over the Death's Head, surmounted as a crest, a rattlesnake with Thirteen Rattles, coiled, ready to strike, with this motto in a similar wreath inverted over it, "Don't tread on me."

Little information is available on the activities of the Veterans Exempts for the remainder of the War of 1812. Only once are they mentioned by name. In a letter from Major General Benjamin Mooers of the N.Y. Militia to his friend Colonel Melancton Smith, U.S. Army, he describes a British raid on Plattsburgh during the summer of 1813. Mooers states that Capt. Woolsey of the "Veterans Exempts" received the flag of truce that the British sent on shore before the main landing. Most likely the Veteran Exempts turned out for other alarms and participated in the Battle of Plattsburgh in September of 1814. The Veteran Exempts, composed of the "socially prominent and politically powerful," were undoubtedly motivated by a feeling of patriotism, but the fear of being left out of the war must have also been a motive for many of the members. Like the Home Guard in Britain during the Second World War they did provide a valuable reserve in a time of crisis.
Jack Barrette, 7 Aug 2008

I found the reference cited by Jack, but there is more to the story than what has previously been told. The flag design was a suggestion, probably not acted upon as there is no further mention of the Veteran Exempts. I did find an earlier article titled the "Veteran Exempts" (note the singular nature of the first word) in the Plattsburgh (N.Y.) Republican, 17 July 1812, p. 2-3, that included the proposed Articles of Enlistment for the unit.

Apparently they had met their organizational threshold of 50 men and so held elections for officers. The Captain was General Mel. L. Woolsey, who is not Commodore Melancton T. Woolsey who was a great hero of the War. I cannot find the letter in question and the local newspapers do not mention Woolsey's part in the raid on Plattsburgh in the summer of 1813. Note the misspelling of the organization's name in the reference to the letter of General Mooers, which could just be a transcription error.

The unit was to be made up of veterans of the American Revolution (who were otherwise exempt from military service), because many of the settlers in upstate New York (and Ohio) were veterans of the Revolutionary War who had been paid by the grants of lands on the frontiers of the country, and by forming the Veteran Exempts they enabled the younger militia men to go off to war while the older men stayed to protect the local settlements. However, they were hardly "socially prominent and politically powerful," with the exception maybe of the four officers. (as stated, Gen. MEL. L. WOOLSEY, Captain; Judge KINNER NEWCOMB, 1st Lieut.; Capt. JOHN STEVENSON, 2nd Lieut.; Col. MARINUS F. DURAND, Ensign. Note a General as Captain, a Judge as 1st Lieutenant, a Captain as 2nd Lieutenant, and a Colonel as Ensign; with the exception of the judge, these were all probably Revolutionary War ranks.)

I searched through 1813 but there was no further mention of the Veteran Exempts in this newspaper. Interestingly, the 31 July 1812 newspaper article is signed with the pseudonym "Miles Veteranus" and is not a description of any real flag, but a suggestion for what the flag of this organization might look like. The entire description and explanation of the flag proposal follows:
It is proposed that it be a black ground with 13 stars for the Union of White, wrought in silver. That in the centre of the Flag there he a Death's Head, with cross bones under, intimating what must soon, according to the course of nature, be their promiscuous fate, and the immediate one of any enemy who shall venture to contend with them. Under these an open wreath, with this motto, ´Thy will he done.´ Over the Death's Head, surmounted as a crest, a rattlesnake with Thirteen rattles, coiled, ready to strike, with this motto in a similar wreath inverted over it, ´Dont tread on me.´"

It is a rule in Heraldry that the worthy properties of the crest borne shall be considered, and the base ones cannot be intended. The ancients accounted a Snake or Serpent an emblem of Wisdom, and in certain attitudes, of endless duration. - The rattlesnake is properly a representative of America, as this animal is found in no other part of the world. The eye exceeds in brightness any other animal - so it indicates penetration. It has no eyelids, and is therefore an emblem of vigilance. It never begins an attack nor ever surrenders - proofs of magnanimity and courage. When injured, it never wounds without giving its enemy notice of its danger. When in undisturbed peace, it does not appear to be furnished with any kind of weapons, they are hidden in it's mouth, appearing, even when extended for defence to those who are not acquainted with them to be weak and contemptible, yet its wounds are decisize [sic] and fatal, certain destruction to its enemies.

The power of fascination attributed to the rattlesnake, by a generous construction, resembles America. Those who look steadily on her are delighted and almost involuntarily advance towards her, and having once approached her never leave her.

This Snake is often found with thirteen rattles, and they are said to increase yearly. - It is beautiful in youth, and its beauty increases with its age. The exhibition of one with Nineteen Rattles, two thousand Miles long and its Head in the middle will astonish the Old World.
Dave Martucci, 12 September 2010

Could this not mean a black canton with 13 white stars, here represented in silver embroidery? I think, especially when I think like a period man, it does. Remember, in the 18th and early 19th century the "union" was the stars, not the canton, and could be placed on anything for best effect. Having white (or silver) stars on a black ground seems logical and very much heraldically correct.

Since there is no more mention of the color of the field, I think the flag was intended to be all black with 13 stars in the upper hoist corner and the other emblems in the center of the flag as described. I also would not model Preble's "spring-loaded" snake onto it, but rather use the model Whitney Smith used in "The Flagbook of the USA" which he took from a Revolutionary War era drum painting.

The illustrations of this flag are usually in black and white (with black 6-pointed stars), although I would expect any real flag to have the snake in its natural colors and the "wreaths" (probably meaning heraldic-type ribbons bearing mottos) in some color such as red or blue. Note the description of the Union seems to be silver stars on white (a stark violation of the heraldic rule of never placing metal on metal - here essentially white on white, an impossible arrangement). The 13 stars were likely imagined as 5-pointed stars, which by this time was very common on actual flags, though some illustrations still showed 6 or 8 pointed stars. Your guess is as good as mine.