In the early part of the 20th century, it became clear to the U.S. Department of the Navy that there was a need for a flag for the Vice President, particularly as successive VPs took on a greater ceremonial role beyond their sole Constitutional duty of presiding over the Senate. Although Navy signal books and regulations since the time of the Civil War had provided for the use of the national ensign or jack, flown at the fore, to signify the presence of the Vice President, there was no distinctive flag for his use until 1915.

In March of that year, a New York Times story reported that he would be given a flag showing a "bluebird" on a white field - apparently a reference to a blue eagle bearing the national arms - for his voyage to San Francisco aboard USS Colorado. Colorado's log for March 22 reports the hoisting of the Vice President's flag, as does the log for the Presidential yacht USS Mayflower for October 29, 1919. It was not until 1936, however, that a Vice President's flag was made official with the issuance of Executive Order 7285. This flag was essentially that of the President with the colors reversed. As with the President's flag of the time, the eagle faced the fly (sinister) rather than the hoist, as in the U.S. coat of arms.

After Presidents F. D. Roosevelt and Harry Truman had the President's flag redesigned in 1945, it seemed appropriate to modify the Vice President's flag as well, while keeping the traditional principle of a white flag with eagle and blue stars. The new flag adopted by Executive Order 10016 on November 10, 1948, was white with the eagle in full color, its wings spread and inverted rather than displayed with the points upward. As in the new President's flag, the eagle's head faced the hoist, but it carried a single arrow in its flyward talon rather than the traditional sheaf of 13 arrows. The stars and sunburst above the eagle's head were omitted, and the eagle was surrounded by a circle of 13 blue stars.

One Vice President after another expressed dissatisfaction with the design of this flag, particularly the inverted wings, which one said made the bird look "droopy." Another compared its appearance to that of a "wounded quail." In 1975, Vice President Nelson Rockefeller prevailed upon President Gerald Ford to order a change, which was promulgated by Executive Order 11884 of October 7, 1975. The new flag, still in use, is white with the same coat of arms shown on the President's flag, and a blue star in each corner.
Joe McMillan, 23 April 2000

The flag is mentioned, along with a photograph, on the website for Dan Quayle's vice presidential museum.

The original flag (15 feet by 20 feet) is housed at the Scottish Rite Masonic Cathedral in Fort Wayne, Indiana (because the Vice President who used the flag, Thomas Marshall, was from there).

"On March 15, 1915, Marshall was in San Francisco as the United States' official representative at the opening of the Panama-Pacific Exposition. During the ceremonies, Marshall was to go aboard the battleship Colorado, which lay at anchor in San Francisco Bay. There was quite a stir aboard ship when the captain discovered that the vice president - and not the president - would be visiting. They had no suitable flag to run up the ship's mast. An order was issued for the immediate production of a flag for the vice president. Who made the flag is a mystery, but it was completed just in time."

Note: The fact that the intention to provide this flag was reported well before the event seems to contradict the story that the flag was put together at the last minute.

The first flag of the vice-president is shown, and one of the reasons it was changed was because of the four stars.

When several men were promoted to General of the Army and Fleet Admiral towards the end of World War Two, and were assigned rank flags with five stars, Roosevelt called in some experts to re-design the president's flag, since he thought no general or admiral should have more stars than the president. (I realize there is an anomaly with the cabinet officers using the same number of stars as the president; I can't explain that).

Prescribing the Official Coat of Arms, Seal, and Flag of the Vice President of the United States

By virtue of the authority vested in me as President of the United States, it is hereby ordered as follows:

Section 1. The Coat of Arms of the Vice President of the United States shall be of the following design:

SHIELD: Paleways of thirteen pieces argent and gules, a chief azure; upon the breast of an American eagle displayed holding in his dexter talon an olive branch proper and in his sinister a bundle of thirteen arrows gray, and in his beak a gray scroll inscribed "E PLURIBUS UNUM" sable.

CREST: Behind and above the eagle a radiating glory or on which appears an arc of thirteen cloud puffs gray, and a constellation of thirteen mullets gray.

Sec. 3. The Color and Flag of the Vice President of the United States shall consist of a white rectangular background of sizes and proportions to conform to military custom, on which shall appear the Coat of Arms of the Vice President in proper colors within four blue stars. The proportions of the element of the Coat of Arms shall be in direct relation to the hoist, and the fly shall vary according to the customs of the military services.

Sec. 4. The Coat of Arms, Seal and Color and Flag shall be as described herein and as set forth in the illustrations and specifications attached hereto and made a part of this Order. These designs shall be used to represent the Vice President of the United States exclusively. 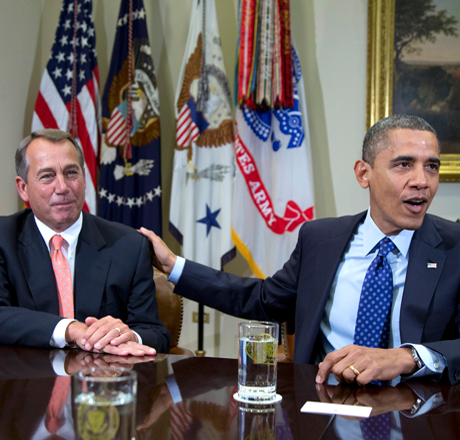 Photographs of the current Vice President's flag commonly show it to have a blue fringe (see example from www.salon.com).
David Phillips, 10 December 2012