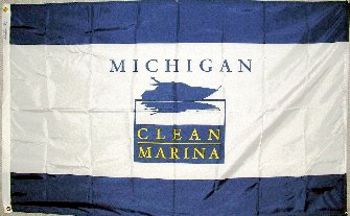 The State of Michigan has its Clean Marina programme, the first designations dating from end 2005. Homepage and quote: www.miseagrant.umich.edu/cmp/index.html.
"As a pledging participant in the Clean Marina Program, marinas do their part to improve and maintain Michigan's waterways by reducing and eliminating releases and discharges of harmful pollutants, sediments, nutrients, general refuse, and anything else that can damage aquatic environments. In order to receive official designation as a Clean Marina, participants need to complete a 10-step process, including training, a self-evaluation checklist, and a site visit and evaluation."

One of the benefits of being accepted as a Clean Marina is being allowed to fly the flag and use the logo. Direct link to logo: gov.boynecity.com/images/resized/CleanMarinaLogo__2_.JPG. A rectangle, horizontally divided white above blue, bears in the lower part white words "CLEAN [horizontal white stripe] MARINA" (serifed); on top of the rectangle is placed the blue silhouette of a speedboat, bow to the right, reflected - as if in water, and in blue - in the upper part of the rectangle.  Below the rectangle then is written the name of the state "MICHIGAN" (serifed) in blue. Although the following page shows another interesting rectangle, a flagoid at that, I am not at all sure if this represents a real item: www.miseagrant.umich.edu/downloads/cmp/clean_marinas.pdf. We are on surer ground in interpreting the triangle on the following page as the program pennant: www.portelizabethmarina.com/clean.htm, although here, too, photographic evidence is still lacking.

The flag is horizontally divided blue-white-blue (each blue stripe being 1/5 of the height?), the logo in the centre.

This pennant is white, bordered in red, and bears the white-and-blue logo near the hoist; the blue state name "MICHIGAN" however appears in the fly.
Jan Mertens, 12 February 2009

The flag is white with two yellow horizontal edges, the logo in the hoist (differences compared to the pennant: yellow words and yellow stripe between them, plus a new element: a yellow sun at upper right, with holding line in blue, and partially in front of the sun the blue silhouette of a flying bird) and in the fly the state name "MICHIGAN" above smaller words "Boating Industries Association", all in blue.
Jan Mertens, 18 March 2009