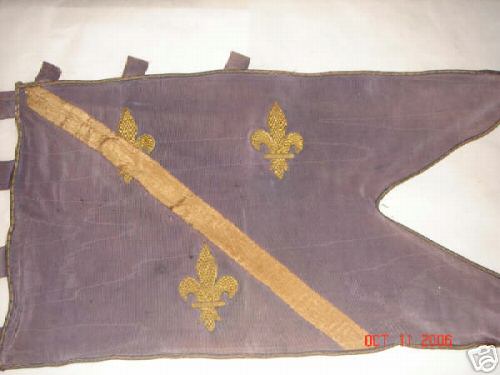 A unique historic French Fleur de Lis flag circa late of 1700s used in the American Independence war According to history, this flag was used during the days of the America Revolution by French troops. It is believed that the blue fleur the lys flag of France flew over all or most of the French forts and settlements in America. In the early sixteenth century explorers like Verrazano, Cartier or La Salle actually raised these royal flags in the new lands, representing the authority of the French kings.

Description:
This Fleur de Lis flag is in really good condition due the age. This one was constructed of a heavy-weight silk material, of 3 fleur the lys embroidered with gold metallic wire. There is a metallic cord around the border. This is a luxury royal flag, very durable for battles and is suitable for indoor use like castles, flying in light to high wind areas and in wet weather conditions like forts.
Length: 34 inches
Width: 16 inches