In 1636 a famous sermon was preached in Salem, Massachusetts by Roger Williams (who was later banished and became the founder of Rhode Island) which stated the cross was a symbol of popery and was therefore the symbol of the antichrist. The Governor of Massachusetts Bay Colony, John Endicott, fearful for his soul, subsequently ordered the cross removed from the flags used in Massachusetts. He was stopped, however, by the Great and General Court (the local legislature) who examined the circumstances of the incident and decided Endicott had "exceeded the lymits of his calling" and stripped him of office and forbade him from holding any public office for one full year. Thereupon the Court stated the standard bearers of the colony could adopt any flag they should choose and, without exception, they removed the cross from their flags, leaving the defacto Massachusetts flag red with a white canton. There are a number of references to this flag over the next 50 years.
Dave Martucci, 27 April 1998

This flag is the subject of Nathaniel Hawthorne's story 'Endicott and the Red Cross', one of his 'Twice Told Tales' (published 1837, second expanded edition 1842). 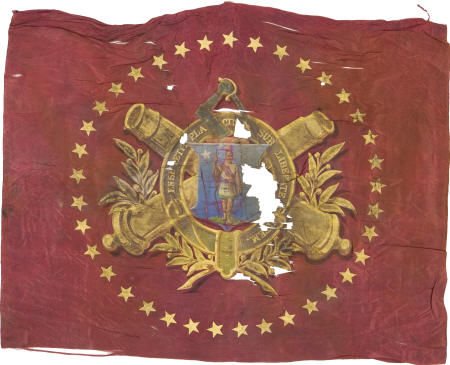 Described on eBay as:

"Civil War Era Headquarters Flag of Battery "A" 1st Massachusetts Light Artillery. Amongst the rarest of all Civil War flags are the silk painted company level standards. The 1st Mass Light had a superb record, being engaged in all the major combat actions of the Army of the Potomac, beginning with the Peninsula Campaign, till their muster out on October 19, 1864, including, Antietam, Chancellorsville, and Gettysburg. Originally equipped with four 10 lb. Parrots and two 12 lb. howitzers, the battery subsequently was issued six 12 lb. Napoleons after the Peninsula Campaign. The flag is of all silk construction, 30" on the hoist and 38" on the fly. Both sides beautifully hand painted with the Massachusetts state seal, with crossed cannons, all inside a wreath of acanthus leaves and berries, surrounded by five pointed stars. The riband on the front bears the legend "Battery A 1st Batt. Light Artillery M. V. M." and the one on the reverse the state motto. The narrow foldovers on the edges are all neatly hand stitched. Overall quite sound, a few cracks and a few areas of loss on the painted portion as can be seen in the photographs. Generally, however, far superior to the condition normally encountered on these rare flags. Doubtless a candidate for professional mounting and restoration, the paint is bright and beautifully executed and completely untouched. Assuming the circle of stars (37) is of specific, rather than generic, significance, it is probable that this flag was produced at the very end of the war, doubtless to replace the  tattered standard carried by the unit through four years of combat. Still, an extremely rare and important Civil War associated flag."
Bill Garrison, 22 June 2008

Concerning a parade flag used in the movie Glory, what comes to mind is flag (not in the Grand Luminary style) that I saw on a photo published in a TV Guide style magazine in 1996. It is seemingly a regular 1863-1865 U.S. flag with 35 stars in a rank-and-file pattern, not in Grand Luminary style, but the stars are golden and there is writing on the short red stripes — as can be seen in many stills and promo imagery:
civilwartalk.com
i.ytimg.com
l450v.alamy.com
4.bp.blogspot.com
www.theyoungfolks.com

US national flags with white flags can be seen in the movie (e.g., images3.static-bluray.com), and the golden star flag is said to be the regimental color of the 54th Massachusetts Infantry Regiment.

However the stars of this regimental color are depicted as white in other renditions, perhaps more reliable than the 1989 move, such as this 1890 lithograph:
commons.wikimedia.org or this survivors' reunion commemorative flag: i.pinimg.com.
A modern "replica" of the 54th regt. color does use golden stars (perhaps influenced by the movie?), but the original 55th does not:
www.museumtextiles.com. See also a contemporary (sepia) photo of the actual flag: commons.wikimedia.org. I would say that the 54th color had 34 stars when the regiment was raised; I have no idea if a new color was reissued to match the new total of 35 in 1863.

The movie prop flag, as evidenced by this still, bore the inscription "54ᵀᴴ REGT." on the third red stripe and on the fourth "MASSACHUSETTS", both centered, set in compact sans serif capitals; the stars, apparently always 35 (3×7) seem to be relatively small and sparse. The actual regimental color(s) of the 54th might have been more alike the known preserved 55th's.