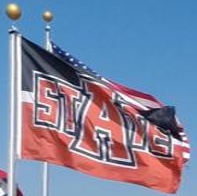 The newer flag uses the "Red Wolves" logo, an all capital letters "STATE" with the "A" larger than all the other letters, spelling out a nickname for the school "A-State". This logo, can be seen at https://commons.wikimedia.org/wiki/File:Arkansas_State_Red_Wolves_wordmark.svg, is placed on a Latvian style flag (top black, white stripe, about 1/10 of the width, bottom red). It can be seen at http://vnis.edu.vn/sites/default/files/styles/760xauto/public/image/slides/asu-banner.jpg?itok=fQDc0jp_. There is a campus in Mexico where a different university flag is used along with the US and Mexican flags. This flag can be seen at
https://i2.wp.com/memolira.com/wp-content/uploads/2018/06/IMG_3280.jpg?resize=1000%2C500&ssl=1

At https://www.ibtimes.com/arkansas-state-university-shooting-update-alert-issued-after-active-shooter-2220612 is a photo of an older flag that was used until the "Indians" moniker was dropped in favor of the "Red Wolves" in 2008; the date of the of the photo.
http://ltc4940.blogspot.com/2008/09/jonesboro-ar.html also has a 2008 photo.
Zachary Harden, 31 July 2018