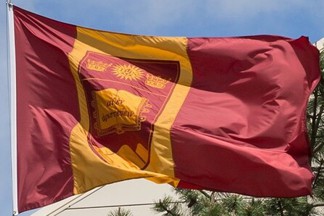 The flag is a vertical triband of the university's colors- maroon and gold. The 3 panels are of unequal width- the narrowest being the maroon hoist and the widest the maroon fly. On the central gold panel is a depiction of the university's arms in burgundy and gold. The actual colors of the arms, and a blazon, can be found at https://en-academic.com/dic.nsf/enwiki/960898. The arms are described as:

"On a field gules, above a trimount in base or, an open book argent edged of the second, thereon an inscription αιεν αριστευειν (Ever to Excel); on a chief sable between two crowns composed of alternate crosses patté and fleur-de-lis or, the badge of the Society of Jesus, azure and or.

The tinctures, gules and or, are the heraldic equivalents of the College colors, maroon and old gold. The "trimount," represents the city, Tremont, the old name of Boston, Massachusetts. The open book, symbolic of knowledge, is the central charge of the academic shield. The chief is derived from the arms of old Boston, Lincolnshire, England, (Saint Botolph's Town), a field sable, three crowns, of crosses patté and fleur-de-lis, per pale or; only two crowns are shown, the place of the third being taken by the badge of the Jesuit Order. This badge has a field, azure, rayonne or, enclosing the sacred letters IHS under a cross and above the Sacred Nails, of the second."

As mentioned, the arms on the flag are in maroon and gold only. Boston College is a university operated by the Jesuit order, with its main campus in Newton, MA, a suburb of Boston. 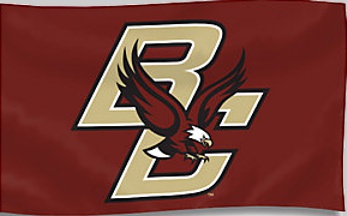