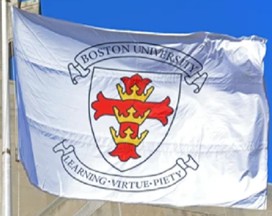 BU has an official flag in addition to the common "athletic" flags. It is the coat of arms on a white background. The coat of arms is argent a Latin cross flory gules overall three ducal coronets in pale or. (The three coronets in pale can be found in the city of Boston arms, in the arms of the local Episcopal diocese, and in those of Boston in Lincolnshire, UK, I believe.) I think there's also some writing on the BU flag - probably something obvious like "Boston University"
Albert S. Kirsch, 16 March 2008

There is an official photograph of the flag of Boston University taken by Kalman Zabarsky as it appears in reflection on the East Window of the School of Theology. The photo originally appeared in the B. U. Bridge, the official magazine of the University. In addition, another photo taken by Zabarsky, this one in color was at www.bu.edu/today/unknown-section/2007/09/16/blowing-wind (link no longer available).

As can be seen in both photos there are ribbons or scrolls both above and below the cross, but the wording is not legible in either photo. I found another photo of the arms, where the scrolls bore the words: Boston University (upper scroll) and Learning Virtue Piety [the school's motto] (lower scroll). I have since located an even better photo, which is available at www.bu.edu/marshplaza/rededication/album04.html which shows at least BOSTON UNIVERS... above and ...RNING VI...ETY below.
Ned Smith, 20 March 2008

The missing words in the write up of the flag refer to the motto, which is "Learning, Virtue, Piety".
Dan Tokar, 17 October 2011