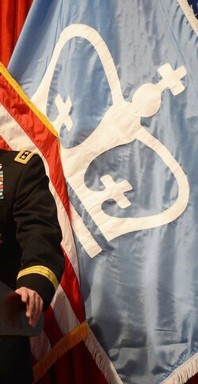 Columbia originated as King's College in 1754. It was renamed Columbia College in 1784 and Columbia University in 1896 (again, the name Columbia College being retained for the undergraduate component). The arms are Azure a chevron argent between three royal crowns or, but Columbia's azure is a very light blue as opposed to Yale's very dark blue. The flag is the same blue with the silhouette of a royal crown in the center in white, with the date 1754 beneath and the letters C and U in the hoist and fly. Components of the university fly the same basic design with their own initials or name replacing the initials of the university. (See examples at
www.columbia.edu/cu/news/report/00/challenge/challenge.html). The shape of the crown is said to be patterned after an iron crown finial atop one of the buildings.
Joe McMillan, 11 March 2003 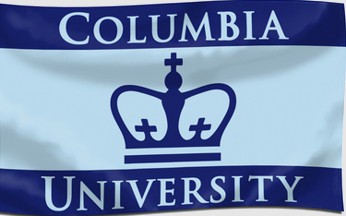 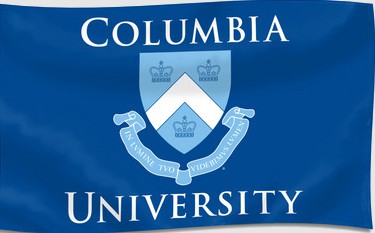 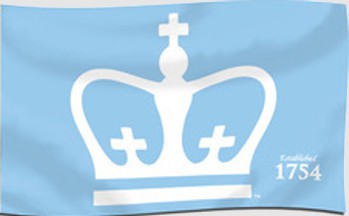 The simple crown flag appears to be the institutional flag:
https://thumbs.dreamstime.com/z/columbia-university-flag-its-morningside-heights-campus-39642696.jpg

The university has (had?) a flag, light "Columbia" blue with a white royal crown in the center symbolizing the institution's original name, King's College, flanked by the letters C and U. The coat of arms of the university is azure a chevron argent between three king's crowns or.
Al Kirsch (Columbia '61), 27 April 2003

The Columbia University Club flag is a white "C" on light blue. Beware: University flags change frequently, for special occasions and the like.
Nathan Lamm, 27 April 2003 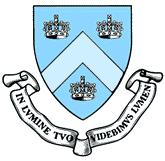 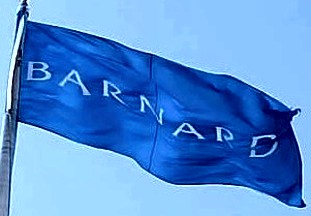 Columbia College is the main undergraduate division of Columbia University. The flag is based on the university's flag, but has a gold crown on light blue, instead of a white crown, and the crown's base is arched. Below the crown are gold numerals 1754 in small print. Above the crown is written Columbia and beneath the crown and 1754 is College- these are in large print but a mid-blue color. An example, in blue, of the arched crown and 1754 can be seen at the top left of www.college.columbia.edu/index.php.
Ned Smith, 10 September 2007 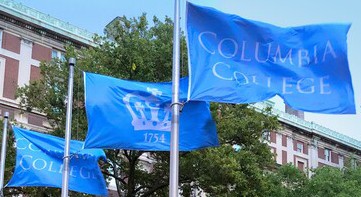 This image shows a white wordmark flag on Columbia blue, along with a variant flag with the 1754 date underneath the older-style crown.
Dave Fowler, 26 August 2022

According to a couple articles I found online (gs.columbia.edu/news-school?article=ceremony-will-celebrate-new-GS-flag-symbolizing-school-pride and columbiaspectator.com/2013/12/11/school-general-studies-flag-raised-today), the flag was designed and presented to the school as a gift from the Class of 2013. The flag that was ultimately adopted was one of three designs selected and submitted to school administrators by a student committee of about 20 people. There was an official flag raising ceremony and dedication on 11 December 2013 at Lewisohn Hall on Columbia's Morningside Campus.

The School of General Studies is one of Columbia University's liberal arts undergraduate schools, specializing in allowing non-traditional students to pursue traditional undergraduate degrees. "Non-traditional" is a term often used to describe students who attend class part-time, work full-time, or may have dependents that they care for while attending school.

The School of General Studies' flag features the school's coat of arms centered on a white field, flanked by the dark blue capital letters "G" and "S".
Randy Young, 12 December 2014

The Fu Foundation School of Engineering and Applied Sciences flag is based on the university's flag. The crown is dark blue on light blue, not white on light blue, and there are a pair of hammers placed in saltire behind the crown (hammers are line drawings in dark blue)- an example of the emblem can be seen in the background at www.engineering.columbia.edu.
Ned Smith, 10 September 2007 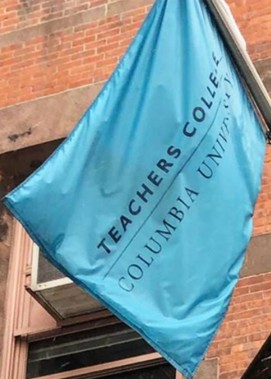 University logo in dark blue on a light blue background.

Teachers College is a separate university from the rest of Columbia University in the City of New York. 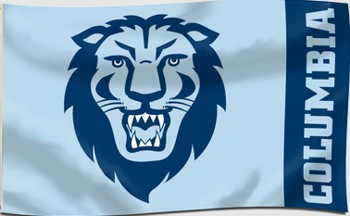 The Haitian Students Association of Columbia University has a flag graphic at their web page. The original file name says "HSA_Flag" and it certainly looks like one, but at this point I don't know if it actually exists in cloth form, or only digital. The flag has a background of 7 stripes, 4 blue and 3 red, and a white arched crown placed upon the 5 middle stripes.
Ned Smith, 11 September 2007