The flag is blue with UCONN in large white letters and UNIVERSITY OF CONNECTICUT in smaller letters below it. 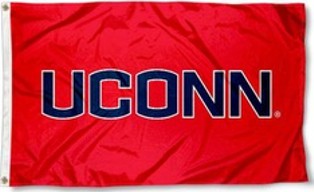 Another flag is red with the UCONN in blue, edged white.
Paul Bassinson, 28 August 2022

University of Connecticut - "The University of Connecticut (UConn) is a public land-grant research university in Storrs, Connecticut, a village in the town of Mansfield. The primary 4,400-acre (17.8 km2) campus is in Storrs, approximately a half hour's drive from Hartford and 90 minutes from Boston. UConn was founded in 1881 as the Storrs Agricultural School, named after two brothers who donated the land for the school. In 1893, the school became a public land grant college, becoming the University of Connecticut in 1939. Over the following decade, social work, nursing and graduate programs were established, while the schools of law and pharmacy were also absorbed into the university. During the 1960s, UConn Health was established for new medical and dental schools. John Dempsey Hospital opened in Farmington in 1975. The university is classified among 'R1: Doctoral Universities – Very high research activity'. The university has been recognized as a Public Ivy. UConn is one of the founding institutions of the Hartford, Connecticut/Springfield, Massachusetts regional economic and cultural partnership alliance known as New England's Knowledge Corridor.” Source: https://en.wikipedia.org/wiki/University_of_Connecticut 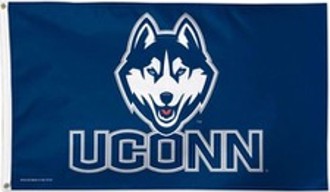 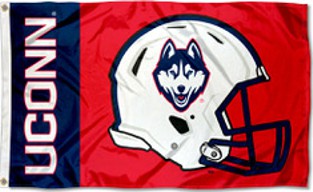