Flagler College is a private liberal arts college located in St. Augustine, Florida. The school was founded in 1968. It is located on the grounds of the old Ponce de León Hotel, a 1888 luxury hotel and now listed as a National Historic Landmark. It was built by Henry Morrison Flagler, the industrialist, oil magnate and railroad pioneer. It was chosen to be the site for the North American Vexillological Association (NAVA) 56th Annual Meeting in 2022.
Sources: Flagler College Website and Wikipedia: Flagler College.
Pete Loeser, 3 July 2022

It seems there is an official college flag at https://staugustinerealestateforsale.com/locations/st-augustine/historic-st-augustine-homes-for-sale/ being displayed in 2019 (https://staugustinerealestateforsale.com/wp-content/uploads/2017/11/cdm07-historic.jpg) where the name of the college, along with the rampant lion, appear in gold on a crimson background. There is also a white flag used in this 2015 photo (http://www.amyscreativepursuits.com/2015/12/our-visit-to-flagler-college.html) but I have no idea what it has as the design.
Zachary Harden, 21 August 2022

image by Zachary Harden, 21 August 2022
based on source located by Paul Bassinson, 17 September 2017

This seal should only be used on official College documents such as diplomas, awards, certificates, and other documents designated by the President or Board of Trustees.
Pete Loeser, 3 July 2022

The Flagler Logo combines the rampant lion shield emblem with the words "FLAGLER COLLEGE" usually with a white background. The words are in gray and the Flagler shield is in crimson, gold, and gray. However situations may arise for the Primary and Secondary Trademarks to be used in different colors and backgrounds as illustrated in the second variant above. This is the Primary Trademark of Flagler College.
Pete Loeser, 3 July 2022

Flagler College's lion shield is said to reflect the best of the College's heritage, history, and traditions. The rampant lion signifies strength and stability. On the shield the school colors are crimson and gold (based on the yellow and red of the Spanish flag). A gray was added as an accent color to provide additional depth and to permit some flexibility for the Saints athletic teams.
Pete Loeser, 3 July 2022 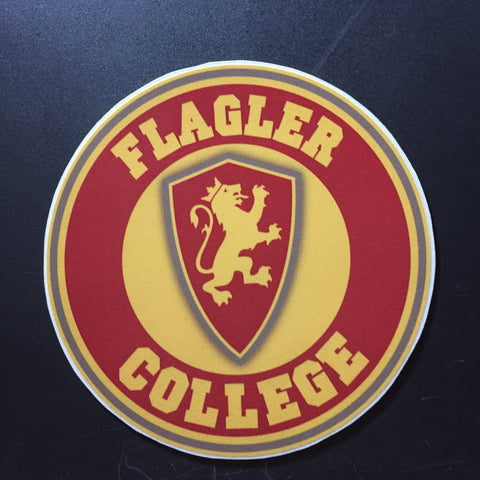 The 56th Annual Meeting of the North American Vexillological Association was hosted at Flagler College in June of 2022. NAVA is the largest organization of flag enthusiasts and scholars in the world. This special flag was designed for the meeting held at Flagler. Its designer was Matthew Thomas, a resident of the United Kingdom.
The NAVA 56 flag features a golden field to represent Florida, the "Sunshine State." The half Burgundy Cross represents the importance of the Spanish Empire to St. Augustine's founding and history. Above it appears a stylized outline of the Castillo de San Marcos, an important historical site and a symbol of the city. The blue bars at the bottom represent Matanzas Bay, on which St. Augustine sits, and the ocean beyond.
This flag was displayed at both the college and flown on the walls Castillo de San Marcos during this international event.
Source: NAVA 56.
Pete Loeser, 3 July 2022