The Yellow Block M on a blue field version of the flag was placed by the coffin of a professor and athletic director at his funeral. It flies over the city hall of its cross state rival's town after a victory. It flies over the Student Union building, and from the central flagpole on campus. This version is the one seen most often on houses, etc. And by "most often" I'd say by a 10:1 ratio.
Terence Martin, 23 November 2006

We do not know whether this flag has any official status or not. We do know there is another flag with the University's seal used officially in some contexts but that does not say this one does not have some officially recognized status also.
Ned Smith, 23 November 2006

Not only the dark blue flag with yellow/gold block "M", but vice versa, a yellow/gold flag with a dark blue "M" are known. Both flags are popular and used with enough frequency by the university and Michigan fans alike to be considered a part of UM symbolism whether they are officially registered emblems or not.
Clay Moss, 22 November 2006 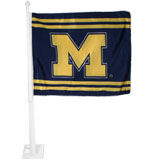 While the "Block M" flag is the most common such flag, I found for sale a somewhat fancier flag which suggests there is no "official" design, despite the wide prevalence of the former.
Albert S. Kirsch, 22 November 2006

The link at www.umich.edu/pres/inauguration/ceremony.html reports on the inauguration of the current president of the university. Behind her in the picture at the top, you can see the Block M flag. In the picture below it, the flags of the various schools within the university are shown, although you can't make out any of the designs. In the middle, just behind and to the right of the president's head is the official flag of the university consisting of the seal on a light blue field. The close-up picture of the speaker farther down the page has a slightly better picture, but still far from enough to make a drawing. The seal itself can be seen here: bentley.umich.edu/exhibits/seals/
Terence Martin, 23 February 2008

The yellow shade is Maize although there is a lot of discussion if this correct. Additionally, UM is not only in Ann Arbor but has "Chancellor" Branch Campuses in Flint and Dearborn.
Steve Shumaker, 16 December 2008

The coat of arms in www.ns.umich.edu/MT/96/Fall96/mta13f96.html has a yellow scroll, a book tipped to see the page ends and spine, which is color alternative yellow, blue, yellow, blue and a white handled lamp with a yellow and red flame.
Steve Shumaker, 26 August 2010 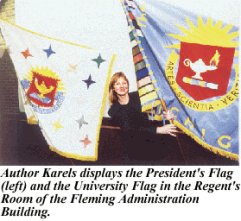 I found the article: "Which Maize? Which Blue?"  www.ns.umich.edu/MT/96/Fall96/mta13f96.html which also has a picture of the official U-M flag and President's Flag.  U-M Official Flag is light blue with the coat of arms (seal minus the double circle) center. About 13 short horizontal bars of several colors separated by black begin at the the hoist. "MICHIGAN" in  yellow is aligned with the bottom edge and "THE" is aligned vertical with the short bars.

Coat of arms: shield in dark red with an Or/yellow rising sun with 11 rays and lower scroll with "ARTES (dot) SCIENTIA (dot) VERITAS". The shield is charged with a "lamp of knowledge" setting a top of a book.

U-M President's flag description: University's coat of arms on a white field with four-pointed stars of various colors potentially encircling the coat of arms and arching along the fly. Starting at the top of the fly the stars colors are: Dark green, purple, white (intersecting with the potential circle), gray, Very light red. For the stars visible starting at the 11 o'clock position: Light red (R-), Light blue (B-), peach? at a 45 degree tilt to the fly, white (again shared with the fly arch of stars), yellow (Y). Its version of the coat of arms has a Very light blue scroll and book below the lamp which is yellow with 2 'spouts' but has a short white flame.
Steve Shumaker, 26 August 2010

U Michigan Flag on the Moon?

For many years there was an urban legend on campus that the crew of Apollo 15 planted a Block M flag on the moon in 1971. The campus newspaper, "The Michigan Daily" debunked the myth, finally, in 2003. Article here:
media.www.michigandaily.com/media/storage/paper851/news/2006/03/29/News/Debunking.The.Moon.Myth-1763410.shtml

The facts are that 20 miniature University flags ORBITED the moon (not planted on the moon), and they were NOT the Block M flag, but the official Seal on Blue flags. You can tell that from the picture in the article. The picture is too small to see the details, but the red is a dead give-away that it's not the Block M flag. Interesting how the urban legend substituted the unofficial, but far more commonly seen, Block M flag in the story. Shows you how much that Block M flag is seen as the "real" flag more so than the seal on a bedsheet.
Terence Martin, 7 March 2008