An article on page 15 of the 28 June 1939 issue of the New York Times says "The brown and blue flag of Tufts College waved last night at the Court of Peace at the World's Fair, where it was raised by alumni at ceremonies marking Tufts College Day at the Fair." No further description alas- nor illustrations.
Ned Smith, 17 April 2008

According to http://ur.tufts.edu/?pid=190&c=141, "The official Tufts colors are a dark brown and a sky blue as prescribed by the Pantone color specification system, Brown PMS 4625 and Blue PMS 279. Other browns and blues should be avoided."
Eugene Ipavec, 17 April 2008

On the page referred to above, there is a link to a page re the Tufts seal http://ur.tufts.edu/?pid=190&c=141#Tuftsseal where it states "The seal may also be used for official ceremonial functions and appear on approved plaques, *FLAGS*, or furniture." [emphasis added]
Also the shades of the Tufts brown and blue, specified by the Pantone values cited by Eugene, are described as "chocolate brown" and "dusty sky blue" www.tufts.edu/home/timeline/html/1876-e-colors.html
Ned Smith, 18 April 2008

Official page on seal, explaining that present version dates from 1966:
"The original design showed the dove of peace with the olive branch in its beak flying downward toward an open Bible resting on a rocky eminence, like a hill. The sun's rays stream through clouds in the background. (…) In 1966, an updated design of the traditional seal was adopted. The book featured is not ecclesiastical, and the rocky eminence was dropped altogether."

The page at universityrelations.tufts.edu/?pid=190&c=141#Tuftsseal also tells us that "The seal may also be used for official ceremonial functions and appear on approved plaques, flags, or furniture." The Fletcher School is a graduate school of international affairs; the oldest such school in the U.S.
Paul Bassinson, 24 April 2020

Official flag plus Fletcher School flag:
https://cdn.tuftsdaily.com/2018/08/DSC0316-1250x833.jpg
Note that Fletcher flag does not have the inscription. 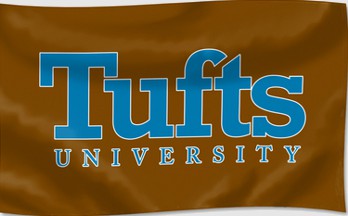