When a flag exists for a US university, there is usually just one institutional flag design. In the case of WVU, the flag is a gold seal on dark blue with "West Virginia University" in gold across the bottom.
Official flags are usually flown from administration buildings and/or displayed at commencements, president's offices and at official presentations.
Dave Fowler, 29 June 2022

It was established by the State Legislature on February 7, 1867 as Agricultural College of West Virginia. On December 4, 1868, lawmakers renamed the college West Virginia University to represent a broader range of higher education.
Sources: https://birthday.wvu.edu/history/timeline
https://www.wvu.edu/about-wvu/rankings
https://www.wvu.edu/about-wvu/wvu-facts
https://en.wikipedia.org/wiki/West_Virginia_University 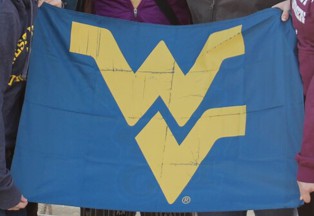 The flag is a blue horizontal background with the "Flying WV" logo in the middle.

"Easily one of the most recognizable university logos, WVU’s Flying WV was introduced at a game on September 6, 1980, initially to identify the Football program and then WVU adopted it as the University’s official logo in 1985. WVU Football coach Don Nehlen is often credited with the logo design, but it was actually designer John Boyd Martin’s mountain-inspired sketch that became the Flying WV."
Sources: https://birthday.wvu.edu/traditions/seal-colors-and-logo, https://magazine.wvu.edu/stories/2015/05/18/the-legend-of-the-flying-wv and https://youtu.be/8x2o86_2NA4

Regarding the colors, "Students adopted the old gold and blue in 1890. Legend says the idea came from the West Virginia state seal and the first verse of “Hail, West Virginia,” the fight song of the University."
Source: https://birthday.wvu.edu/traditions/seal-colors-and-logo
Esteban Rivera, 28 June 2022