Yale University - "Yale University is a private Ivy League research university in New Haven, Connecticut. Founded in 1701 as the Collegiate School, it is the third-oldest institution of higher education in the United States and among the most prestigious in the world. Chartered by Connecticut Colony, the Collegiate School was established in 1701 by clergy to educate Congregational ministers before moving to New Haven in 1716. Originally restricted to theology and sacred languages, the curriculum began to incorporate humanities and sciences by the time of the American Revolution. In the 19th century, the college expanded into graduate and professional instruction, awarding the first PhD in the United States in 1861 and organizing as a university in 1887. Yale's faculty and student populations grew after 1890 with rapid expansion of the physical campus and scientific research. Yale is organized into fourteen constituent schools: the original undergraduate college, the Yale Graduate School of Arts and Sciences and twelve professional schools. While the university is governed by the Yale Corporation, each school's faculty oversees its curriculum and degree programs. In addition to a central campus in downtown New Haven, the university owns athletic facilities in western New Haven, a campus in West Haven, and forests and nature preserves throughout New England. As of 2021, the university's endowment was valued at $42.3 billion, the second largest of any educational institution. The Yale University Library, serving all constituent schools, holds more than 15 million volumes and is the third-largest academic library in the United States. Students compete in intercollegiate sports as the Yale Bulldogs in the NCAA Division I – Ivy League.” Source: https://en.wikipedia.org/wiki/Yale_University

Yale was established in 1701 as the Collegiate School and renamed Yale College, after Elihu Yale, in 1718. It is the third oldest university in the U.S., after Harvard and Virginia's College of William and Mary. It became Yale University in 1887, with the name Yale College maintained (as at Harvard) for the undergraduate element. The arms are Azure an open book proper inscribed in Hebrew characters "Urim v'Thummim" (Light and Truth). These arms date back to 1736. Yale formerly flew a blue flag with its name in white block letters but now has a banner of its arms (see photograph; it is the farthest to the viewer's right of the four flags on the stage; I think the white one with blue seal between this and the Connecticut flag must be that of the city of New Haven.) As has been previously discussed on the list, Yale blue is very dark--approximately the same as the blue on the stars and stripes. In addition, Yale College and the schools and residential colleges use banners of their own distinctive arms or the arms on a blue or white field, as seen in the picture mentioned above.
Joe McMillan, 11 March 2003

Yale University's website has a page on the history of the university color, www.yale.edu, which says the Pantone equivalent is currently PMS 289. Other websites variously call PMS 285 or 286 "Yale blue." The law specifies it as Standard Color Card Cable No. 70086. In any case, the Yale page makes clear that it is a very dark blue.
Joe McMillan, 19 November 2003

When the University of California was deciding its colors in the 1860s-70s, it was decided that gold would represent the state's principal natural resource and blue would honor Yale, the alma mater of most of the new university's founders.
Source: calbears.ocsn.com.
Joe McMillan, 19 November 2003

I can attest that Yale does indeed use a very dark blue. Similar shades are known as "Navy" blue or "midnight" blue. They are at least as dark as "old glory" blue of the U.S. flag or the Navy blue of the NY Yankee uniform, which I took in the past to be black.
Albert S. Kirsch, 20 November 2003 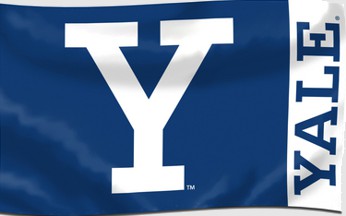 Houses and colleges are the terms used by both universities for the residential arrangements for undergraduates. They were established at both universities in the first half of the 20th century in an attempt to replicate the environment of Oxford and Cambridge Universities, which are more or less federations of separately endowed and chartered colleges. The houses and colleges at Harvard and Yale differ from the dormitories at most other American universities in that they have faculty members affiliated with each house/college and (as Lewis Nowitz makes clear) are central to the student's identity during and after his/her student days.

Both Harvard and Yale, like most other American universities, are also divided into colleges and schools that are actual academic units rather than social/residential ones. At both places, these units also have their own coats of arms, flags, and banners.

Berkeley - Gules a chevron between ten crosses paty argent.
Branford - Azure ten open books proper edged or and on a chief of the last three elm leaves vert.
Calhoun - Argent a saltire engrailed sable and a chief of the University (viz. azure an open book proper inscribed in Hebrew characters 'Urim v'Thummim').
Davenport - Argent a chevron between three crosses crosslet fitchy sable.
Ezra Stiles - Sable a fess or fretty of the field between three fleurs-de-lis all within a bordure of the second.
Jonathan Edwards - Ermine a lion rampant vert.
Morse - Argent a battle-ax palewise gules between three pellets.
Pierson - Sable three suns in splendor in pale or between two piers [pallets] erminois.
Saybrook - Quarterly, 1 and 4 azure three lions rampant or; 2 and 3 sable on a cross engrailed within a bordure likewise engrailed or five pellets.
Silliman - Argent three piles wavy pilewise gules, overall on a fess vert three acorns stems in base or.
Timothy Dwight - Argent a lion passant in base a cross bottony fitchy gules and on a chief of the same a crescent of the field.
Trumbull - Argent three bulls heads erased sable.
Joe McMillan, 12 March 2004 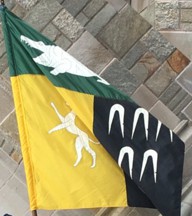 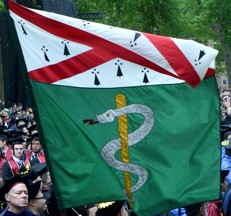