U.S. Shipping Board - The U.S. Shipping Board was created in September 1916 and organized in January 1917 to revitalize the U.S. merchant fleet. It built some 1,000 cargo ships, commandeered more than 2 million tons of shipping from private yards and owners, and operated the German ships seized by the U.S. government when it declared war on Germany in 1917. The house flag of the USSB was 6 x 9 feet, white with a three-star version of the shield from the U.S. COA superimposed on a blue anchor and flanked by the letters US and SB. According to the 1917 volume of U.S. Naval Institute Proceedings, pages 2345 and 2346, the flag was designed by Charles Collens, a Boston architect. The USSB was redesignated the U.S. Shipping Bureau in the Department of Commerce in 1933, then disestablished and replaced by the Maritime Commission when Congress passed the Merchant Marine Act of 1936. Its functions operating the government merchant fleet were lost to the Merchant Fleet Corporation in 1927, which was also subsumed into the Maritime Commission in 1936.
Joe McMillan, 14 January 2001

I have just seen a photo at a local historical exhibit which shows a slightly different version. The photo showed the 1917 launch of a newly-constructed vessel carrying the USSB flag at the jackstaff. The flag had a slightly smaller shield and anchor, flanked by the letters U and S only, and the words Shipping Board beneath.
Ned Smith, 24 June 2007

On http://www.usmm.net/ww1train2.html (no longer available) is shown a version with red letters. On the shield the red and white stripes are reversed as well (seven red ones instead of six): 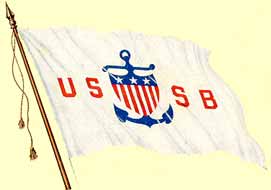 On a photo on the following page (wreath-laying on 29 May 1922, Statue of Liberty) we do not see the initials' colour of course but the right outer stripe on the shield seems indeed to have been red: www.usmm.net/honordeadww1.html
Jan Mertens 25 December 2005

I have located a second WWI source showing this alternative pattern. At a local historical society I saw a poster bearing this version of the flag. An image of the poster can be seen at www.bapl.org/assets/pics/posters/eww1jobplant.jpg, unfortunately too small to make out much detail on the flag, but I can confirm that the original shows the USSB flag with "U" and "S" flanking the emblem, and "Shipping Board" beneath (all in blue).

Also, another poster at www.bapl.org/assets/pics/posters/eww1needships.jpg shows the same version flag, again rather small, but a little clearer. I have not seen an original of that poster.

Finally, it should be noted that there is yet another version of the flag, reported by Jan on 25 Dec 2005 (above, along with a USSB pennant, below). This version had the same layout as the one reported by Joe, but had the letters in red rather than blue, and had the color of the red and white stripes on the shield reversed.
Ned Smith, 8 July 2007

Chairman of the board

There also was a USSB pennant, see third poster on this page: www.usmm.net/posterbuild1b.html - a long blue pennant bears a reduced version of the USSB emblem on a white disk: see attachment.
(I understand the Emergency Fleet Corporation mentioned on this poster was a subsidiary of the USSB.)
Jan Mertens, 25 December 2005

books.google.com indicates that the USSB pennant was not for shipboard use but was instead an award given to the U.S. shipyards with the best production each month. There were 1st, 2nd, and 3rd place pennants. From the journal _Shipping_, 10 Aug 1918, page 20, the pennant for first place was blue, second place was red, and third place was white.
Joe McMillan, 20 April 2014