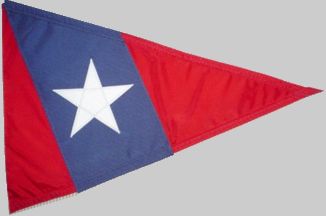 Rhode Island Yacht Club, founded in 1875, uses a red burgee with a blue diagonal stripe with a large white star on it.
See the RIYC website: www.riyc.org.
Ivan Sache, 8 July 2008

The Rhode Island Yacht Club has so neatly laid out their entire set of officers' flags, that even though quite a few are known to us, I can't help but report them:
https://www.riyachtclub.org/the-club-burgee