The new Coat of Arms consecrates Urbaneja Municipality as first one of Anzoátegui State which completes its symbols and until now unique in Venezuela by selecting its Coat of Arms by popular way and also the first-born in Latin America elected by consult on Internet.
Maximilian Kopp Marcano, 11 May 2005

After a long process, thanks to the neighbors of Lecherěa and a Decree signed by Mayor Gustavo Marcano, since past May 6th of present year, Urbaneja Municipality counts with an Official Coat of Arms arose as a result of a consultation made by the Chronicler of the City to the Symbollogist Raůl Orta, Chief of Department of Heraldry of Venezuelan Military Aviation.
On a letter dated on October 9th , 2003 this specialist affirms that the precedent Arms was "... an emblem whose composition doesn’t fulfill the conceptual and technical rules of HERALDRY."
The election process was this way: between March 10th and 20th, 2005 was distributed a part of 1000 vote forms for the selection of the Coat of Arms between the assistants of 10 citizens’ assemblies which took place in several locations of Lecherěa; between April 8th and May 5th contributors, police and all personnel of Municipal Power of Lecherěa emitted their votes and between April 18th  and May 4th, 133 citizens did the same thanks to the support of Web Site  EnOriente.com. Concluding the scrutiny, was selected Project N° 2 with 440 votes followed by Project No 1 with 189 votes; N° 3 with 174 votes and N° 4 with 88 votes.
The new Official Coat of Arms of Lecherěa whose authors are Raul Orta (design) and Maximilian Kopp (meaning) is described this way:
Attributes: Field with German shape. First Quarter in Sky Blue (variation of Azure or heraldic blue) presents the figure of Nuestra Señora del Valle del Espěritu Santo (Our Lady of Holy Spirit Valley) on a wood fishing boat disposed in front. Second Quarter with field in Argent (white) shows a wood cross loaded with a garland of flowers in Or (yellow), Argent (white), Gules (red), Azure (blue) and Vert (green) accompanied by two fishes disposed in pale (vertically). Third Quarter with field in Azure (blue) presents a landscape where appears in first plane the sea from which arises El Morro de Lecherěa (Lecherěa’s Ridge) with a rising sun to the bottom, all in its colors. As external ornaments, the blazon shows an Anchor in Silver put behind the Coat of Arms and a ring in Argent (white) with borders in Azure (blue) which contains the inscriptions: "MUNICIPIO TURISTICO EL MORRO LICENCIADO DIEGO BAUTISTA URBANEJA" (Something like “The Ridge Licenciate Diego Bautista Urbaneja Tourist Municipality) on the superior part and " 1953 - LECHERÎA - 1992" on the inferior part, made in gothic capital letters in Or and separated each other by means of circles with the same metal.
Semiology: First Quarter symbolizes the ideals of good faith, hope and  protection that always has offered to the citizens of Lecherěa their sentimental matron, Virgin of the Valley (lovely called Vallita) who in her celebrations (September 8th) is followed by her parishioners in her already traditional stroll in boat by the sea: most colorful marine procession of Venezuelan Orient which   distinguishes highly Lecherěa of the rest of the region. Second Quarter, in synthesis, is a tribute to Nature and an exaltation of the values of Courage, Sacrifice and Valor which have the inhabitants of Urbaneja Municipality. The field in Argent (white) represents the ancient saline turned into city; flowery cross is the unitary symbol of gratefulness to the bonanza and  requests of security granted by Mother Earth and Sea to fisherman pioneers of Lecherěa. On the other hand fishes alludes to artisan fishing like original sustenance source of the inhabitants of the locality. Third Quarter represents the values of Justice, Loyalty and Perseverance whose virtues shall to perpetuate the settlers of Lecherěa. All it is represented by means of a marine landscape with El Morro (the Ridge) because both graphical elements are geographic icons par excellence of the zone, identifying it with its economic essence, as it’s the sustainable tourist activity. Finnally, the  sun and its rays constitutes an sample of the warm of Venezuelan Eastern People and indicate the sense of integration from Urbaneja Municipality to  Anzoátegui State, because the sun is represented like is showed on the State Coat of Arms. External Ornaments: Anchor symbolizes future wishes of affirmation, peace and progress for the Municipality; and the ring, with the emblematic colors of municipal flag (white and navy blue) frames the denomination of the Municipality, the name of its Capital and dates of its elevation to the category of Civil Parish of Bolivar District (1953) and to Municipality on 1992.
Raul Orta, 11 May 2005 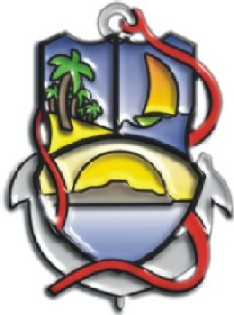