The law and the official description of symbols of Lara State (in Spanish) at <www.poderlegislativolara.com>.
Jens Pattke, 19 November 2001

Attributes and Meaning. Lara State is located in the Central Western region of Venezuela. Its flag, rectangular with ratio 2:3  is divided into two stripes: the superior one is red and occupies 2/3 parts of the field loading thirteen yellow and white oblique rays which form a twilight sun: memory of characteristic crepuscule of the region,  symbolizes the historical inheritance, the hope, the greatness, the courage, the passion, the wealth, the force and the faith of the Larensian people searching for obtain an integral development. The green stripe occupies the remaining third and alludes to the fertility of the land, the abundance and productivity of the Larensian people and ground.
Historical Synthesis The flag was product of a concourse organized in year 2000 by the Legislative Council of the Lara State, whose winner was the Prof. Víctor Jose Parra Ortiz
Sources: Law of Flag, Shield, Anthem, Band and Seal of the Lara State, 2000.
Raul Orta, 4 December 2001

I am a Venezuelan journalist and I have been this weekend in Barquisimeto, Lara State's capital city and I have seen in public buildings a new flag, different of that your are showing in your page, actually the former governor's flag.
Néstor Luis Garrido, 8 January 2002

Herewith I send you the description I found in the law on the flag of the State of Lara, which I found on the internet:
The creation of the flag was the initiative of Deputy Hector Alzaul Planchart, current president of the Legislative Council of the State of Lara, who called a competition that took place on 7 December 2000, and which was won by Victor Jose Parra Ruiz. The law's insistence on having a red sky is owing to the fact that Barquisimeto, the state capital, is popularly known as the city of dusks. I copy now the disposition and description of the emblem. I can investigate when this decree was officially published, which is considered in Venezuelan law to be its effective date.

CHAPTER I: ON THE SYMBOLS OF THE STATE OF LARA
Article 1: The heraldic symbology of the State of Lara is composed of the flag, the coat of arms, the hymn, the sash, and the state seal.

CHAPTER II: ON THE FLAG OF THE STATE OF LARA AND ITS USE
Article 2: The flag of the State of Lara is that which was approved as a result of the calling of a competition by the Presidency of the Legislative Council of the State of Lara on 27 November 2000 and approved at a meeting of the Board of Directors of the Legislative Council of the State of Lara on 8 December 2000.
Article 3: The heraldic composition of the flag of the State of Lara is the following: It consists of a rectangle of three (3) by two (2) meters, divided into two (2) stripes, the first twice [the width of] the second, a field gules (red) with a setting sun issuing from the line that divides the two stripes, with rays formed of three parallel stripes, two of gold (yellow) and, between those, one of silver (white), dividing the field 13 times. The second stripe is green.
The significance of the form and colors included in the flag is as follows: The design of the flag manifests the elements that stand out as representative of a Venezuelan state on which providence has heaped blessings. Among these are a beautiful open sky [represented] by the red, which accompanied our heroes in the struggle for the justice and liberty worthy of this people, the red tinged with the immense passion of the the courage and creativity of the Larense [not clear here whether it's the red that colors the passion or the passion that colors the red]. A radiant setting sun that continues raising its arms in hope, that its people may continue to be enlightened and heaped with blessings, that faith in God and in the people themselves, who will build the highways leading to harmonious and sustainable development. A wide valley with its verdure represents the fertility of the lands, which day by day enhance the nourishment of the daily bread of the Venezuelan people. Valleys that have inspired musicians, poets and painters, captivated by their subtle natural enchantments.
This design combines the aforementioned elements (the twilight sky, the setting sun, and the wide valleys) with colors that represent the following:
The red for greatness, courage, and passion.
The yellow for riches, strength, and the faith of the people.
The green for the abundance and productivity of the land as well as of the Larense people.
Article 4. The use of the flag of the State of Lara is governed by the rules specified below:
It will be hoisted on national and state holidays on official institutions, on the left (sinister) side of the national flag and at a lower level.
When a municipality of the state possesses its own flag, it will be located to the left of the national flag and, at a lower level, to that of the State of Lara.
It will be permanently placed in a position of honor in the offices of the Governor, the President of the Legislative Council, and mayors, the chamber of the Legislative Council, and chambers of municipal councils.
It will be raised on national and state holidays at the accommodations and buildings of the state, located at the right [sic] side of the national flag. The flag will be hoisted at events of an academic, sporting, cultural, or communal character.
The flag of the state will be hoisted at 6:00 a.m. and lowered at 6:00 p.m. the same day. Cases not envisaged in the preceding parts will be resolved by majority decision of the Legislative Council.
Néstor Luis Garrido (translated by Joe McMillan), 10 January 2002 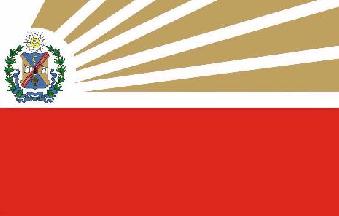 Lara State has no flag of its own, and regional government offices and agencies use the regional executive flag (white field, a very narrow red strip on its base and five ray-like ocre stripes spreading from its base-hoist corners to its fly-top corner). the State's Coat of Arms is added to the flag.
Guillermo Aveledo, 30 September 1999 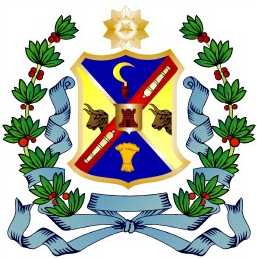 Attributes: Field of compound shape quarterly per saltire: the quarter of the chief, enameled in azure (blue) loads a gold sickle faced to sinister (with the leaf turned to the left-hand side of the shield); the dexter and sinister quarters, enameled in gold (yellow) load in each case a cut ox head in its natural color; the quarter of the base, enameled in azure shows a gold ears beam. Over all a bar of gules (red) loaded two gold canons and charges a silver escutcheon with a tower in its color. As external ornaments, the Coat of Arms shows a ten-pointed star with another one of five edges superimposed, all in gold how crest and a laurel crown with its fruits enlaced with a silvered pennant.
Symbolism: The enamels of the Coat of Arms recall the National flag of Venezuela. The sickle and the ears remember the agriculture and the abundance of the Larensian ground. The ox heads allude to the cattle, another important resource of the state. The bar and the canons symbolize the indomitable fierceness of the Larensian people. The silvered escutcheon and the tower remembers the strength required to defend the integrity of Venezuela. The Western Star how crest recall the geographical situation of the state like part of the Republic and also indicates its high destiny and its ideals. The laurels and the pennants are a tribute to the Liberators of our Nation.
Historical Synthesis: Created by Decree of the Legislative Assembly of Lara State in February 9th, 1877, the CoA was ratified by the President of the State, Doctor Rafael González Pacheco on May 8th, 1905.
Source: "The Sacred Symbols of the Venezuelan Nation", Francisco Alejandro Vargas. Caracas 1981.
Raul Orta, 4 December 2001