Erroneous 1948 flag as occasionally depicted (all stars of equal size)

Flag: The Flag has a red field with a blue canton in the upper left- hand corner. Five white stars on the canton symbolize the Southern Cross constellation. The red, white, and blue colours stand for loyalty, purity, and patriotism. Adopted in 1962.

The Auckland Museum has a photograph of a Samoan Blue ensign on online at http://www.aucklandmuseum.com/collections (image archived here: flag; badge detail). It's clearly the same as this, but the details of the badge all differ somewhat. I wonder whether there would have been a standard pattern to these, or whether any flag showing three trees on a beach would suffice.
Peter Hans van den Muijzenberg, 2 March 2018

The nearest thing to a “standard pattern” would be the illustration found in “Flags of All Nations” published under the authority of the Admiralty until the 1950s, but I suppose that if a flag was acceptable to the local authorities then it was OK. The illustration in Flags of All Nations was supposed to be based upon the original artwork that accompanied the granting of such a badge.
Christopher Southworth, 2 March 2018

I think we should assume that standard patterns weren't all that relevant, until there's evidence that they were.
Jonathan Dixon, 4 March 2018

The former German islands of Samoa were seized and occupied by New Zealand forces on 29 August 1914. On 7 May 1919 the Supreme War Council of the Allies allocated the islands under mandate to New Zealand. An Order in Council passed by the Governor-General of New Zealand on 1 May 1920 provided for civil administration of the islands, and the mandate was approved by the League of Nations in December 1920. From this time until 1997 the islands were known as Western Samoa.

On 4 May 1921 the Government of the Dominion of New Zealand wrote to the Admiralty, requesting warrants for defaced Red and Blue Ensigns for Western Samoa, adding that, "Ensigns with three palm trees encircled, and emblazoned on the fly had been used, by officials, and by the public, since the British Military Occupation." The defaced Blue Ensign was used on land, and the defaced Red Ensign at sea. The badge may perhaps have been inspired by the single palm tree badge used on the Federal Flag of the Cook Islands, from 1892, until they were annexed by New Zealand in 1901.

It was not clear whether a Mandated Territory was entitled to defaced ensigns, or whether the Administrator of Samoa was entitled to a defaced Union Jack, as if he were a British Governor. It was pointed out that if a defacement for Western Samoa was not authorised, on the grounds that the Samoans were not legally entitled to one, they would use the New Zealand flag, which was a defaced Red Ensign anyway. On 30 March 1922 the Admiralty informed the Colonial Office that they were prepared to issue a warrant for a defaced Red Ensign if the Secretary of State for the Colonies considered it more appropriate than an undefaced Red Ensign. This was approved 30 July 1922 though the warrant for the Samoan Red Ensign was, for some reason, not issued until 16 January 1925. This may have been to do with the wording of the warrant. In Protectorates the usual wording was, "vessels owned by natives of the .... Protectorate." The Warrant was eventually issued as, " ... three palm trees proper .... for vessels belonging to the inhabitants of the Islands of Western Samoa."

In December 1946 the General Assembly of the United Nations approved the Trusteeship Agreement under which New Zealand formally committed itself to promote development towards self-government in Western Samoa. The first step was the passing of the Samoa Amendment Act 1947, one part of which changed the office of Administrator to High Commissioner. It seems that the High Commissioner continued to use the Administrators defaced Union Jack, even though it was not in accordance with the new status of the territory. It was reported that it was flown by him on board HMNZS Hawea at Apia on 2 March 1948, and possibly continued in use until independence in 1962.

According to a letter from the Colonial Office to the Admiralty the four star Western Samoa flag that replaced the Red and Blue Ensigns was not approved until 9 September 1948. Details of the five star flag that replaced it were published in the New Zealand Gazette 24 February 1949. It was approved for general use ashore in conjunction with the New Zealand Ensign, both flags to be of the same dimensions and of the same shades of red and blue. Public Record Office documents ADM 1/8625/80. ADM 1/8690/219. ADM 1/21655.
David Prothero, 16 January 2003 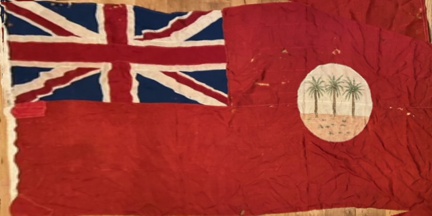 I have a Samoan red ensign (dated 1928 and measuring 9 feet long) closely follows the image by Martin Grieve as opposed to the one shown in the link from Auckland museum, although the grass clumps are more sparse. I assume that the flag I have was made for a Samoan registered ship. Detail of the seal can be seen here.
Martyn Overington, 17 November 2020

The cross flag was adopted on 23 December 1879 in an agreement signed on the deck of the SMS Bismarck:

All flags of Samoa made hitherto are hereby abolished, and a new flag is hereby adopted, to show thereby the unity of Samoa.

The flag is thus:--A red flag, with a white cross, and also a white star with five points; the star shall be put in the upper part, next to the flagstaff."

The phrase "new flag" suggests that this flag did not exist before 1879.
Brendan Hennessy, 7 August 2022

The British Acting Consul in Apia wrote in a letter dated December 20, 1875, describing the "present flag":

"On the 24th April [1875], the new Samoan flag was hoisted at Mulinum [Mulinu'u], which was saluted with twenty-one guns from the U.S.S. 'Tuscarora.' Said flag is four red and three white stripes field, upper canton, blue with white star. The stripes represent the seven islands forming this group."
Brendan Hennessy, 7 August 2022

The British Acting Consul in Apia wrote in a letter dated December 20, 1875:

"The flag that was saluted by the late Commodore Goodenough, of Her Majesty's ship 'Pearl,' in 1873, was red field, upper canton blue, with white star in the centre, and represented the Samoan Constitution and Government of August, 1873, -- Which were abrogated by Mr. Steinberger's action, and for which he substituted the present Constitution and flag.'

This flag was first raised on 2 October 1873. "Mr. Steinberger" is Albert Barnes Steinberger, an American envoy who became Samoa's first Prime Minister under a constitution that he wrote.
Brendan Hennessy, 7 August 2022

The "Flags of Paradise" chart shows an older flag: a red field with a white crescent and a white 5-pointed star pointing upwards. It is labeled "Samoa 1858-1873".

I find this flag rather strange. It is the only of the several flags of the chart to have a crescent, and I cannot imagine a Muslim influence in Samoa (which was under "control" of Protestant missions and Germans).
Ivan Sache, 15 July 1999
See information below

In my research to uncover my own genealogical links with Samoa, I have uncovered a picture of a flag labeled "flag of Samoa".

It appeared in the book Papalangee, or, Uncle Sam in Samoa: A Narrative of the Cruise of the US Steamer Narragansett, written by George B. Rieman and published in Oakland 1874. I think the only place to view this original publication is the Mitchell Library, Sydney.

I viewed the publication in a microfilmed reproduction which formed part of "Samoa 1830-1900 and other research materials collected by the late R.P. Gilson", filmed by the Pacific Manuscripts Bureau (PMB # 1003; reel 3; Folders 42,43).

I believe this to be a largely accurate reproduction of what I saw. The fifth stripe sat flush with the base of the canton, and there are 9 stripes in total. The canton in the original was a bit squarer than how I have drawn it here. The stars in the original were all 5 pointed and clearly white. The orientation of stars and crescents as I have drawn it may be slightly off, but they certainly formed a cross pattern around the two crescents, shown correctly. I could not determine proportions as the flag was drawn flown on a flagpole in the wind. As it was in black and white I could not tell for certain what colours the flag was, however the canton was definitely darker than the stripes. Also, reading the account itself, the captain of the ship was charged with giving a speech to Samoan natives to encourage them to allow the US to annex the Samoan Islands. The flag may even have been designed by the US themselves, Thus I would strongly suspect that the flag's colours were the same as the 'Stars and Stripes', (which would interestingly also provide continuity with the current flag of Samoa).

The date of the visit to Samoa I think was some time in 1872, and the account states that "the United States is a nation of thirty four states and forty million people", although I can't determine what period that would have been based on my rudimentary knowledge of American history.

I also find it interesting that this design had crescents on it considering the 1858-1873 flag also had a crescent. Ivan Sache found this flag strange, questioning why there would be a Muslim influence in Samoa. I would say with near 100% certainty that the crescents here do not symbolise Islam. It is a co-incidence, and I would suspect that the moon has significance in Polynesian symbolism.

Furthermore, another point of interest for the flag that I discovered, is that the arrangement of the crescents can be seen to spell out the letter "S", for Samoa. I wouldn't know whether that was intended or not.
Tony Muller, 24 January 2007

The flag corresponds to the League of Tutuila, and it was created by the commander of the Narrangaset, Meade on 1872. The bands, apparently of various colors, symbolize the islands. The two half moon form a "S". This design influenced the modern flag of Samoa.
Jaume Ollé, 20 February 2007

There's a contemporary drawing of the flag on Google books, accompanied by a description written by its designer Richard Meade: https://www.google.ca/books/edition/House_Documents/JC9YAAAAcAAJ?hl=en&gbpv=1&pg=RA12-PA9&printsec=frontcover

The flag is short (4:5 or 3:4?) with a square canton, and the colours are reversed from the American flag. The description reads as follows:

The nine stripes represent the nine islands of Samoa, viz: Tau, Olosenga, Ofu, Aunuu, Tutuila, Upolu, Manono, Apolima, and Savaii.
Tutuila is the central island of the group; Pago Pago harbor is the key to Samoa.
The four white stripes and white stars represent the four large islands, viz: Savaii, Upolu, Tutuila, and Tau. The five blue stripes represent the small islands. The moon (an ancient emblem in Samoa) is shown in the first and last quarters representing the letter S, or Samoa.

The moon being an "ancient emblem" of Samoa is an interesting detail. That would line up with the crescent moon on the 1858 flag.
Brendan Hennessy, 21 August 2022 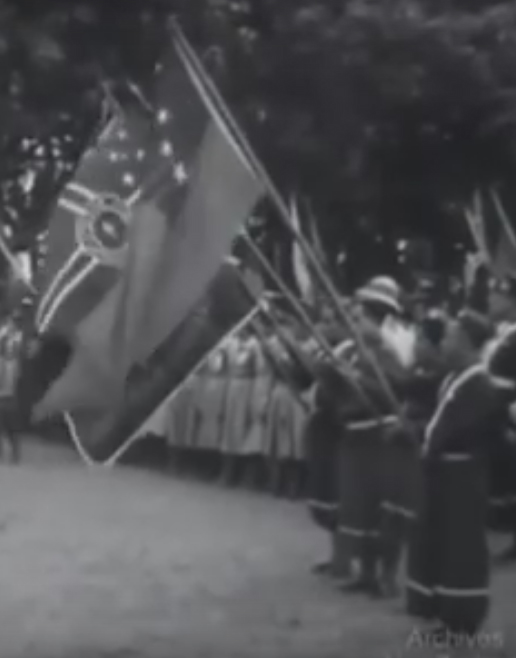 This would be the flag of the Germany Colonial Society based on the star constellation that seems to be on the flag.
Pete Loeser, 8 January 2016