The Hopi is an important American tribe in Arizona
Jakub Grombíř, 16 January 2008

Flag of Hopi nation is vertical turquoise-white-yellow, in the center of white stripe is emblem of Hopi tribe: a round table banded with two desert flowers. Hopi live in Arizona (their capital is First Mesa) in number of 7000 people. They were one of most developed nations of pre-Columbian America with advanced agriculture and stunning fortressed villages named "pueblo".
Jakub Grombíř, 16 January 2008 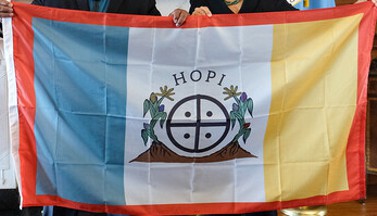 On the Department of the Interior's Flickr site, there was a photo of the Hopi flag, but with a red border.
Dave Fowler, 1 September 2021

It appears under the page for "Hopi Veterans Services" and it is indicated "Hopi flag with red border (2)", but it is not mentioned if it is a specific flag, for the veterans or else, or for the nation.
Jean-Marc Merklin, 1 September 2021