The Montana First Nation is a Treaty 6 government, one of four First Nations in the area of Maskwacis, Alberta.
Ben Cahoon, 21 October 2017

The flag is a red-white-red Canadian pale with the band logo centred.
Ben Cahoon, 21 October 2017

The flag is Canadian style vertical triband, with orange-white-orange stripes and bobtail in the middle with blue cloud and green grass, and lettering "MONTANA" above and "BOBTAIL" below in the honor of the Chief Bobtail (1826-1900).
Valentin Poposki, 17 September 2019 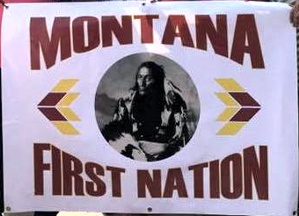 I have two photos that show different flag of the Montana First Nation. Maybe it is a former or unofficial flag.
Valentin Poposki, 21 August 2019