map image by Peter Orenski based on input from Don Healy

The Northern Cheyenne continue to utilize the flag described in Dr. Whitney Smith's "Flag Book of the United States", a light blue flag bearing the Indian glyph of the "morning star", or "Wo' hih' hev" (FBUS, 260-262). The symbol has been used for ages by the Cheyenne in their art and decorating." He continues with, "According to Dr. Smith, the flag dates back to 1964 and is based upon a design suggested by the then President of the Northern Cheyenne, John Woodenlegs (Ibid.). One other source, Eugene D. Little Coyote attributes the actual design to Hubert Bearchum, but agrees that the design was adopted by the administration of Pres. Woodenlegs. Mr. Little Coyote also notes that along with adopting the "Morning Star" design, Pres. Woddenlegs selected "Wo'hih'hev" as his name for himself (e-mail, dated May, 11, 1997). Mr. Little Coyote points out that if the flag employed traditional coloration, the background would be a brownish-red while the star would appear in black. "
Michael Smuda, 7 January 1999 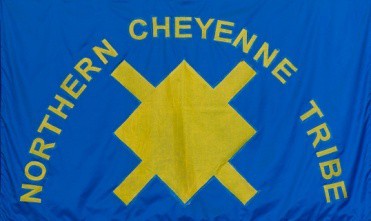 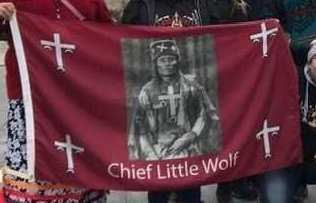 Also, there is (some kind of ceremonial) flag in honor of the Chief Little Wolf, who led the tribe back in Montana, which is permanently hoisted in the tribal council room and is waved on some events.
Valentin Poposki, 19 March 2020