The Norway House Cree Nation received its current name when the Hudson Bay Co. established a post near the northern outlet of Lake Winnipeg (1814) in recognition of the Norwegian laborers, recruited to built the post. The Nation is signatory to Treaty 5 signed in 1875. It is located on the bank of Nelson River, some 30 km north of Lake Winnipeg and 456 air km north of Winnipeg.
Three reserves on 7,949 hectares: Population: about 6,000.
Chrystian Kretowicz, 1 March 2011

A photograph of the flag can be seen at Facebook.
Chrystian Kretowicz, 1 March 2011 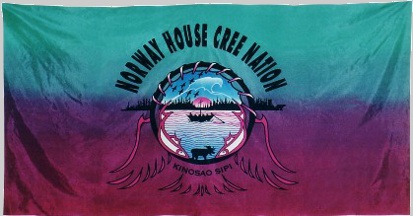 I located a photo taken at a powwow where the color flag is visible, but all the photos of official setting show the white flag.
Ben Cahoon, 18 April 2020

Norway House and similar cases - it's not yet clear whether there are real new flags or someone just made some flag at home thinking that current flag is boring. I suppose that many of native flags are not formally adopted or standartised.
Ben Cahoon, 19 April 2020

Earlier version of the flag

André Flicher, provided me with the earlier version of the flag of the Norway House Cree Nation dated 2006 or 2007. The image is  corroborated by the photograph of the actual flag at www.nhcn.ca
Chrystian Kretowicz, 3 March 2011

I think this is just odd usage of plain white flag.
Janis Lasmanis, 13 May 2020