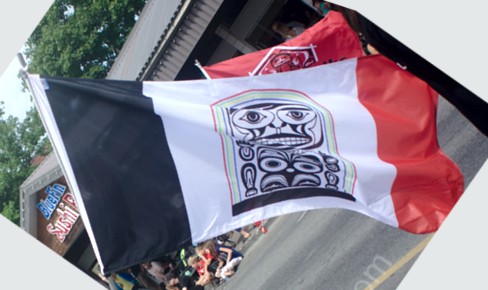 The Nisga'a Lisims Government is an autonomous native government in BC, that consists of four first nations. In this particular case, those first nations are officially designated "Nisga'a Village of...". Those are Gingolx, Gitwinksihlkw, Laxgalt'sap, and New Aiyansh (official name according to Canada and BC governments) or Gitlaxt'aamiks (official name in Nisga'a documents).
Valentin Poposki, 23 December 2019

The flag of the NVL has the same pattern as the Nisga'a Nation flag, but with NVL logo without lettering on the white field. Here are image of the logo, and photo of the flag.
Valentin Poposki, 23 December 2019