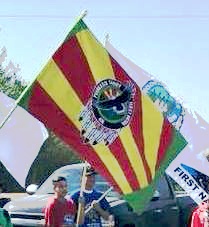 The flag was a white field with the band's emblem centred. Image above based on this photograph.
Ben Cahoon, 11 October 2017