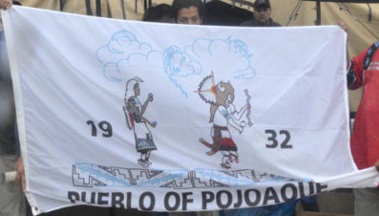 Pojoaque Pueblo is one of the six Tewa-speaking Rio Grande Pueblos, and a member of the Eight Northern Pueblos. The Pueblo was settled around 500 AD, with the population peaking in the 15th and 16th centuries. It is part of the Santa Fe Metropolitan Statistical Area.

The Tribe's flag is seen at pojoaque.org. It shows two figures in ceremonial costume, above a black and blue graphic, and below blue outline clouds, all on a white field. The number 19 and 32 are placed on either side of the two figures.
Ben Cahoon, 27 August 2017