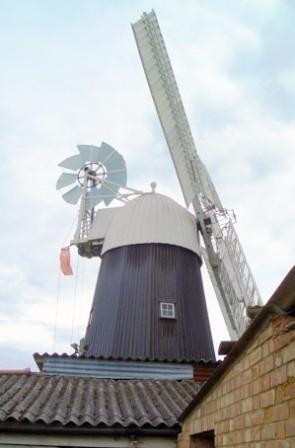 [Editorial Note: the following was received as a question on protocol, however the nature of the information is of significance in a local practice.]

I am chairman of the Mills Section of the Society for the Protection of Ancient Buildings, the national organisation dedicated to the research, recording and repair of historic wind- and water-mills.

Our newsletter recently contained a letter from one of our members in Kent, concerning the display of the English flag from the sails of a windmill during the football World Cup last year. A local resident, and member of the Flag Institute, had claimed that this was disrespectful both to the flag and to the mill (as a venerable historic building).

I understand that the sails of the mill were stopped in the St. Andrew's cross position, and St. George's flags on short staffs displayed (I think vertically) from the two uppermost sails.

Examination of old photographs in my collection suggests that, despite the complaints of the local resident in Kent, such displays were not uncommon in the past. The methods of display vary:

(5) and (6) seem to be of relatively modern use, and (to me) are the least appropriate, being rather in the nature of a fairground novelty when the sails are turning. (3) seems to be of modern use in the UK but traditional in the Netherlands. (4) clearly has some basis in historic tradition, while (1) and (2) are both quite well-attested by photographic evidence from the turn of the century onwards, and in my view look more appropriate that other forms of display.

I am also aware of examples (from at least 1897) of the Union Flag being painted onto the blades of windmill fantails, together with more general "red, white and blue" colour schemes applied to sails. These seem to relate to Queen Victoria's jubilees.
Gareth Hughes, 28 April 2008