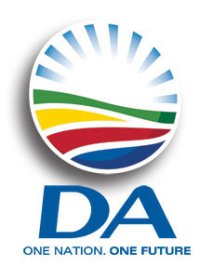 The Democratic Alliance unveiled a new logo at Constitution Hill in Johannesburg on 15 November 2008. The new logo replaces that which was adopted by the party in 2000 when the Democratic Party and New National Party merged to form the Democratic Alliance, which is the current official opposition in the South African parliament having won 12,37% of the vote in the last election and gaining 47 seats.

The party announced the new logo as part of the repositioning and rebranding of the party in preparation for the forthcoming general election which is to be held on 22 April 2009.

"What we have unveiled here today is not just a new logo, a different look. This is not a marketing exercise. It's much, much more than that. It's our promise - a promise that we will deliver on the South African dream for the rainbow people" said party leader Helen Zille at the launch of the new logo. Thus the logo symbolises a morning sun rising over the rainbow nation. It represents the party's dream of an open opportunity society for all. It lifts our sights and our spirits. It signals hope. And it is grounded in the party's love for diversity said Zille.

The new logo will represent the DA on the ballot paper in the forthcoming general and provincial elections and also appears as the flag of the party.
Bruce Berry, 10 Apr 2009

The flag of the official opposition in South Africa, the Democratic Alliance (DA) can be seen at their website at this address. The flag comprises two vertical stripes of blue and yellow with the  party logo in the centre.
Gary Selikow, 14 Oct 2001

The Democratic Party (DP) and the New National Party (NNP) recently merged to form the Democratic Alliance (DA). The idea behind this merger is to form a united opposition in South Africa for the forthcoming municipal elections which are to be held in November. New symbols have been adopted for the Democratic Alliance but these are not yet shown on the websites of either the DP or NNP.
Bruce Berry, 04 Aug 2000

image from this website, reported by Gary Selikow, 14 Oct 2001

The official explanation of the DA logo is given as follows:
It represents the vitality, dynamism and energy of the Democratic Alliance.  It represents parties joined together into one cohesive whole, the circle symbolising strength through unity.  The logo is a modern design with the strong symbol of the sun as a core element.  The combination of the corporate colours, yellow and blue, binds us together.  The colours of the logo are representative of a joining of  forces and the sun, a positive, bold and universal symbol of hope, represents South Africa.  The yellow represents the pursuit of a prosperous opportunity society and embodies the energy and enthusiasm with which the party works towards this ideal.  The light blue represents the sea and a horizon symbolising forward thinking and vision for the future.  The dark blue represents the boundless expanse of the sky, a symbol of the potential of the people of South Africa.
Bruce Berry, 27 Feb 2001

The Democratic Party (DP) was formed on 08 April 1989, when the former Progressive Federal Party, Independent Party and National Democratic Movement merged. Under the combined leadership of Zach de Beer, Denis Worrall and Wynand Malan, the DP won 36 seats in Parliament in the general election of September that year. However, the history of the DP goes back to 1959 when a number of liberal members of the United Party broke away to form the Progressive Party. The cause of the split was the UP's inability to find a clear-cut alternative to the National Party's apartheid policy. The PP took its stand on constitutional reform, calling for an entrenched Constitution incorporating a Bill of Rights, for an independent judiciary and for a federal Constitution in which the powers of the provinces would be constitutionally protected. It stood for an economy based upon free enterprise. It would be 35 years before the members of the Progressive Party saw their ideals realised in South Africa's interim Constitution. In the 1961 election only Mrs Helen Suzman kept her seat in Parliament for the PP. Thus began one of the great parliamentary performances of all time: Mrs Suzman sat alone for 13 years, the sole principled opponent of racial discrimination in the whole South African Parliament. She fought against detention without trial, pass laws, influx control, job reservation on grounds of colour, racially separate amenities, Group Areas and forced removals. She demanded trade union rights for blacks and fought for better wages and working conditions. In 1974 six more PP members won seats in Parliament. Soon after this the PP merged with a new breakaway group from the United Party, the Reform Party, to become the Progressive Reform Party in 1975. In 1977 another group of UP members left the Party to form the Committee for a United Opposition, which then joined the PRP to form the Progressive Federal Party. During 1987 Denis Worrall resigned as South African ambassador in London to return to politics. He formed the Independent Movement to fight the 1987 general election. Only Wynand Malan won his seat and when Mr Malan left the Independent Movement, Mr Worrall formed the Independent Party. Mr Malan, together with others, formed the National Democratic Movement. The PFP had lost a number of Parliamentary seats in the 1987 election and in 1988 Zach de Beer became the PFP leader. He continued negotiations which culminated in the IP, NDM and PFP disbanding to form the Democratic Party in April 1989. The National Party government immediately called a general election for September of that year, in which the DP improved its position while the NP lost seats both to the DP and to the right-wing Conservative Party. This was the turning point for NP leader FW de Klerk, who announced a radical change in government policy on 02 February  1990.

With the unbanning of the ANC, PAC and other liberation organisations, and the release of Nelson Mandela, the process of negotiating a peaceful solution to South Africa's political impasse began. DP leader Zach de Beer was chosen as the first Management Committee Chairman of Codesa. Both in Codesa and the subsequent Multi-Party Negotiating Process held at the World Trade Centre in Kempton Park, the DP played a vital role in the negotiation of an interim Constitution which included most of the principles and ideals around which the PP was formed in 1959. The April 1994 general election was the liberation election, the first in which all South Africans voted together. The ANC recorded a significant victory, with the DP only winning 1,7% of the vote on the national level. With only 10 Members of Parliament, and under the leadership of Tony Leon, the DP began a new fight: the fight for the protection of human rights and the extension of federalism and free enterprise in South Africa. In the 1999 general election the DP vastly improved its showing becoming the official opposition with 9.6% of the votes and 44 parliamentary seats.
Gary Selikow, 02 Aug 2000