The South African Communist Party (SACP) is a political party in South Africa. It was founded in 1921 and was declared illegal in 1950 by the then governing National Party and was unbanned in 1990 (together with the release from prison of Nelson Mandela).   The SACP is one of the members of the "tripartite alliance" together with the African National Congress and the Confederation of South African Trade Unions (COSATU). 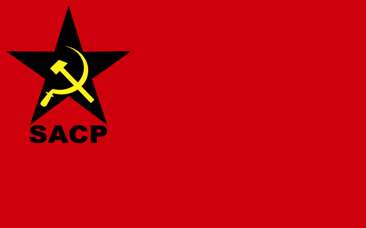 A flag shown on the SACP website has the party initials in black capital letters under the star.  This version can be seen in various photos such as here and here.

A variant of the flag is the same horizontal red flag, with the logo and party initials, but instead of being located on the canton, is located in the middle, as seen here.
Esteban Rivera, 17 Nov 2017

The website of the SACP. shows the logo of the South African Communist Party as being a sickle & hammer in yellow on a black star fimbriated in yellow on a red field in the canton.
Francisco Manuel Garcia, 21 Sep 2001

image from this site, reported by Francisco Manuel Garcia, 21 Sep 2001

The Communist Party of South Africa states on their website that :
SYMBOL AND FLAG
The symbol of the SACP shall be a black star containing a gold hammer and sickle. The flag of the Party shall be red with the symbol placed in the top left hand corner.
Although it only mentions a black star (not with a gold border), the symbol (Logo) shown on their site shows a gold border.
Franc Van Diest, 26 Jan 2002