Amanzimtoti is a coastal town just south of Durban in KwaZulu-Natal. According to local legend, when the Zulu king Shaka led his army down the south coast on a raid against the Pondos in 1828, he rested on the banks of a river. When drinking the water, he exclaimed "Kanti amanzi mtoti" (Which translated from isiZulu means: "So, the water is sweet"). The river came to be known as Amanzimtoti ("Sweet Waters"). The Zulu word for "sweet" is actually mnandi, but, as Shaka's mother had the name Nandi, he invented the word 'toti' to replace 'mnandi' out of respect not to wear out her name.

Amanzimtoti is renowned for its warm weather and its beaches. It is a popular tourist destination and is also very popular with surfers.

Prior to its incorporation into the eThekwini Metropolitan Municipality on 05 December 2000, Amanzimtoti flew a flag with the full achievement of its municipal Arms in the centre of a white field. 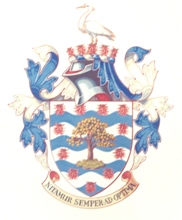 The blazon of the arms granted to Amanzimtoti by Letters Patent on 04 November 1958 is as follows:

ARMS: Barry wavy of eight Argent and Azure on a mount a (coral) tree proper within an orle of eleven (coral) flowers, proper
CREST: On a wreath of the colours issuant from a circlet of eight (coral) flowers from a Cattle Egret proper
MOTTO: NITAMUR SEMPER AD OPTIMA (Let us always strive for the best).

The blue and silver wavy bars in the shield represent the Indian Ocean, on the shores of which the town is situated.  The tree is a representation of the Coral tree which is found in the area.  The Coral tree produces a distinctive flower which is also shown on the shield.  The banks of the river is home to many Egret birds which forms the crest of the Arms.

Both the flag and the Arms are no longer used following the incorporation of Amanzimtoti into the eThekwini Metropolitan Municipality in December 2000.
Bruce Berry, 12 Dec 2006