Pinetown is an industrial town just inland from Durban in KwaZulu-Natal, South Africa. It was established in 1850 around the Wayside Hotel, itself built the year before, along the main wagon route between Durban and Pietermaritzburg.

Pinetown used an heraldic banner based on the shield from its coat of arms before it was incorporated into the eThekwini Metropolitan Municipality on 05 December 2000.  This flag was also unusual in that it did not conform to the usual South African proportion of 2:3, but was instead 1:1. 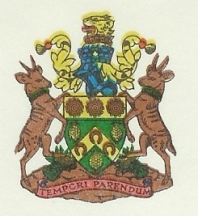 The blazon of the arms designed by Mr H Ellis-Thompson and granted to Pinetown by Letters Patent on 19 June 1959 is as follows:

ARMS: Vert on a chevron between three pineapples Or as many horseshoes Sable on a chief Gold three cogwheels also Sable
CREST: Out of a mural crown Sable masoned Or, charged with a mullet of six points Argent, a lion’s head wreathed about the neck with a torse Gold and Vert.
MANTLING: Or and Vert
SUPPORTERS: On either side a bushbuck wreathed about the neck with a torse Or and Vert and resting the interior hoof on a garb of maize proper
MOTTO: TEMPORI PARENDUM (We must move with the times).

The three pineapples in the shield of the Arms are a play on the name of the town, which was named after Sir Benjamin Pine, Lieutenant-Governor of the Colony of Natal between 1848 and 1856.  Pineapples are also characteristic of the agricultural activities in the area, while the horseshoes are symbolic of the importance of the town on the road between Durban and the interior.  The cogwheels, at the top of the shield, are symbolic of the growing importance of industry, which has now replaced agriculture as the most important economic activity of the area.

The mural crown is the traditional heraldic symbol of local government and it is charged with the so called Natal (or Christmas) Star, as it was on Christmas Day in 1497 that Vasco da Gama became the first European to see the coast of what became known as Natal.  Christmas in Portuguese is 'Natal', which gave rise to the original name for the region.

The lion's head is taken from the Arms of Sir Benjamin Pine and it has a collar wreath in the livery colours of the town (gold and green).  The supporters are two bushbuck, which also have collar wreaths in the the livery colours of Pinetown, and under the inner hooves of which are maize plants.  The rocky compartment is symbolic of the distant mountains (Drakensberg) which are visible from the town.

Following the incorporation of Pinetown into the eThekwini Metropolitan Municipality in December 2000, the flag and Arms are no longer used.
Bruce Berry, 11 Dec 2006

Sir Benjamin Chilley Campbell Pine, KCMG was also Governor of the Leeward Islands from 1871 - 1873, and is the central figure in a major British Colonial flag mystery described here.

My personal contention on the issue of the Colonial badge which defaced the British blue Ensign at that time was indeed intended to be a pun on Pine's name, and believe that Bruce's excellent and highly informative posting strengthens my belief.
Martin Grieve, 11 Dec 2006