Northern Province is the northern most province of South Africa, reorganized from northern Transvaal. Its southwestern border with Mpumalanga is largely defined by the borders of the former bantustans of Bophuthatswana, KwaNdebele, Lebowa and Gazankulu. It borders the current Mpumalanga, Gauteng and North-West provinces as well as Botswana, Zimbabwe and Mozambique. It includes the former homelands of Gazankulu and Venda and part of Lebowa.
Antonio Martins, 30 May 1999

Northern Transvaal is now called Northern Province.  Up to September 1995 none of the 9 new South African provinces have adopted their own flags although one or two have proposals in this regard. There is currently a debate in this country as to whether the provinces should have their own flags or not with the ruling ANC holding the view that the provinces should not have individual flags.
Bruce Berry, September 1995

South Africa's northern most province, known as Northern Province since 1994 (initially it was called Northern Transvaal) adopted a new name on Tuesday, 12 February 2002. It is now officially Limpopo Province, or Limpopo for short.
Mike Oettle, 15 Feb 2002

South Africa's Northern Province (previously Northern Transvaal) has changed its name to Limpopo Province from 12 February 2002. It has also been announced that the province's capital, Pietersburg, is to be renamed to Polokwane - meaning place of safety. The name "Northern Province" was unfortunate, because the rugby-team of Northern Cape province was and is playing as the Northern Province team.
The province does not have its own flag but does have its own coat of arms.
Bruce Berry, 18 Feb 2002

Coat of Arms of Limpopo Province 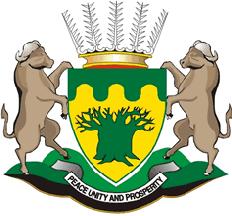 image from this site, reported by JJ Andersson, 5 May 2002

ARMS: Or, a baobab tree and a chief wavy, Vert; the shield ensigned of a circlet Or, heightened of eight cycad leaves supported by sets of buffalo horns, Argent.
SUPPORTERS: Two buffalos proper.
SPECIAL COMPARTMENT: An undulating compartment, Vert above and Sable below, the lower edge Or.
MOTTO: PEACE, UNITY AND PROSPERITY.
Registered with the South African Bureau of Heraldry on 23 March 1998.
JJ Andersson, 5 May 2002