Mafikeng is the capital of the North West Province, and is located approx. 300km north-west of Johannesburg and 20km south of the Botswana border. The town was originally the headquarters of the Barolong tribe and was founded in the 1880s by British mercenaries who were granted land by a Barolong chief. The settlement was named Mafikeng, a local Tswana word meaning "place of stones" which was spelt as Mafeking by the original settlers.

The Goshen Republic was established at Rooigrond, some 10km away and in 1890 the Pioneer Column left the town en route for Matabeleland marking
the European conquest of what was later to become Rhodesia. The railway to Bulawayo was constructed from the town through Bechuanaland to by-pass the Boer controlled Zuid-Afrikaansche Republiek (Transvaal).

It was from Pitsani Pothlugo, just north of Mafeking, that the now infamous Jameson Raid against the government of the Zuid-Afrikaanse Republiek started on 29 December 1895. The town achieved further notoriety during the Second Anglo-Boer War when it was besieged for 217 days from October 1899 to May 1900 by some 8 000 Boer troops. The Siege of Mafeking turned Robert Baden-Powell into a national hero, following which he went on to establish the international Boy Scout movement. The subsequent celebrations following the breaking of the siege also gave a new word to the English language - to "maffick" or celebrate wildly!

Mafikeng had the unusual distinction of serving as the capital of the Bechuanaland Protectorate from 1894 until 1965, even though it was outside the protectorate's borders - the only such example in the world.

Despite being completely surrounded by the Bophuthatswana homeland, Mafeking initially remained part of South Africa following Bophuthatswana's independence in 1977. Following a local referendum on the issue, the town was incorporated into Bophuthatswana on 20 September 1980 and the spelling of 'Mafikeng' restored.

Although the seat of government for Bophuthatswana was Mmabatho (meaning "Mother of the People"), this was a new town created during the 1970s immediately adjacent to Mafikeng. Both towns were administered separately until following the end of apartheid in April 1994 when Bophuthatswana was re-incorporated into South Africa. Mafikeng and Mmabatho were merged to form the capital of the newly created North West Province under the name Mafikeng.
Bruce Berry, 22 Sept 2006

The original municipal arms of Mafikeng were approved by the London College of Arms in 1903 and are described as follows:

ARMS: Argent, between six bars wavy Azure between two Native heads profiled and couped in chief, and Seme of Fusil's. On a Chief Gules dexter and sinister a piles of stones between four shells and overall an esctucheon surmounted by an Imperial Crown between ammulete Or. On a pile stones a lion rampant armed with his dexter claws a double-edged sword and in dexter a shield charged with the Union Jack
CREST: On a pile of stones a lion Or, armed Gules, gardant Sejant, holding with his sinister claw a double-edged sword hilted to the first and the dexter supporting a shield charged with a Union Jack
MOTTO: NE CEDE (Never Yield or No Surrender).

The lion rampant represents the role of the town in "defending the British Empire" during the Anglo-Boer War with the gun shells symbolising the 8 month siege. The pile of stones is a reference to the Tswana meaning of the name of the town, while the Native heads represents the indigenous inhabitants and the wavy bars represent the alluvial diamond deposits found in the vicinity of the town. The motto refers again to the siege of Mafeking where a "few held their own against the Boer forces".

Like in the case of Pretoria, these arms were amended to reflect a more modern heraldic style. The amended arms were registered with the South African Bureau of Heraldry in January 1972 and are described as:

ARMS: Per Saltire: I, Gules, a fasces fesswise Argent; II and III, barry wavy of eight Argent and Azure; IV, Gules, three annulets Or, placed 1 and 2; the whole within a bordure Argent charged with eight pellets
CREST: Upon a rock proper a lion rampant, armed and langued Gules, holding in the dexter paw a sword ererct, Or
WREATH AND MANTLING: Argent and Gules
MOTTO: NE CEDE (Never Yield or No Surrender).

These Arms are still in use but no municipal flag was or is currently being flown.
Bruce Berry, 22 Sept 2006

Mmabatho was established during the 1970s as the capital of Bophuthatswana. Despite the incorporation of Mafikeng into Bophuthatswana in 1980, both towns had separate administrations until 1994. The flag of Mmabatho was a heraldic banner of the shield of Arms which were registered by the South African Bureau of Heraldry on 17 October 1986 and described as follows:

ARMS: Per fess enarched enhanced Orange and Azure, on a fess enarched enhanced Argent, seven gunstones, and in base a leopard's face, Or.
CREST: Issuant from a mural crown Azure, masoned Argent, in front of a thorn tree, two flags of the Republic of Bophuthatswana flotant, the flagstaffs in saltire, proper.
MANTLING: Argent and Azure.
SUPPORTERS: Two kudu proper, each gorged with a mural crown Azure, masoned Argent.
SPECIAL COMPARTMENT: On a ground Vert, stones proper.
MOTTO: NE CEDE (Never Yield or No Surrender). 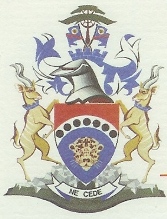 Leopards are traditional symbols of Tswana authority and only Chiefs may wear a leopard skin which is a symbol of their hereditary authority. The leopard and Bophuthatswana flags in the Arms thus refers to Mmabatho's status as capital, with the gunstones alluding to the siege of Mafikeng. The kudu supporters refer to the wildlife of the area while the orange and blue were also the "national colours" of Bophuthatswana. The motto is the same as that used by Mafikeng.

The Arms and flag of Mmabatho ceased to be used following the merger of Mmabatho with Mafikeng under the name of Mafikeng on 27 April 1994.
Bruce Berry, 22 Sept 2006