Within the "old" South Africa, 10 homelands were created, four of which were granted "independence" by South Africa (not recognised by any other country in the world). These former South African Homelands/bantustans ceased to exist on 27 April 1994. They have all (including the former so called independent Homelands) been reincorporated into South Africa.

The flags of the former Homelands are no longer in use (either officially or unofficially).
Bruce Berry, 25 April 1996

Qwaqwa was a very small territory, with no enclaves, in northeastern Orange Free State (today's Free State), bordering on Lesotho and Natal.
Antonio Martins, 30 May 1999

The name QwaQwa means "where we come from" and the homeland was given internal self-government on 1 November 1974.
Bruce Berry, 01 Dec 1998

You mentioned that the name means "where we come from". We believe you are mistaken. The name means "whiter than white". It refers to the white sandstone cliffs in the area. We know because we grew up there!
Eric Radebe and Danie Crowther, 15 Jan 2000

Qwaqwa does indeed mean "whiter than white". The area of 655 Km2 (253 sq mi) is situated in the Drakensberg mountains and used to be known as "Witsieshoek" (White corner - would be an easy translation), after the farm that was originally situated there. When you look at the area from a distance you can see all these white rock formations sticking out (I believe it is sandstone), and there are many of them, each rock formation is a "wit", and plenty of them would be "witsies". Furthermore the area is situated in a corner between Freestate, KwaZulu - Natal and Lesotho (So the complete translation would sound something like the following: White boulders of various size sticking out of the surface in this corner of the country. Qwaqwa is therefore more than just whiter than white, it also refers to the multitude of these rock formations. The South Sotho people are also refered to as Basotho, and the capital of the homeland was called Phuthaditjhaba. The area is situated at heights of between 1 600m and over 3 000m. Originally there were 2 tribes of South Sotho people settled there (late 1870's), the Kwena and the Tlokwa tribes, although they lived separate the Kwena were allowed to rule the Tlokwa. In 1969 the area was combined into a single territory, and called KwaKwa (until it was realised that this spelling would make them part of a West African sub-group), later that year it was changed to Qwaqwa, and in 1974 they were granted self-government.
Franc M.A. Van Diest, 16 Jan 2000

I just came across your site about QwaQwa. It interesting reading about QwaQwa from your perspective as I am from QwaQwa and used to be a journalist there.

I got motivated to email you because there is an error made regarding the name Witieshoek and what it means.

Qwaqwa does indeed mean "whiter than white"  and "Witsieshoek" (White corner) would be an easy translation.  The QwaQwa meaning is very close but that of Witsieshoek is fundamentally incorrect. In fact the name Witsie comes from Wetsi and it is the name of the leader who fought and resisted the white invaders from the QwaQwa mountains. The whites had an impossible task of dislodging him referred to his area as "Wetsie's post" or corner and it later took an Afrikaans corruption to become Witsieshoek (which translates as White corner).
Vusi Moloi, 13 Feb 2004

The design of the QwaQwa flag is set out on section 2 of the QwaQwa Flag Act of 1975, which reads as follows:
"The flag of QwaQwa shall be a flag consisting of a field of green, thereon an orange fess stripe, there-between a Basotho pony rampant proper. The width of the QwaQwa flag shall be equal to two-thirds of its length".

The green symbolises the land, while the two couped orange stripes, coming from the hoist and fly respectively, represent the two original tribes from which the nation evolved and their traditional links with the Orange Free State.

The Basotho pony refers to the sure-footed progress of the people on the often difficult path of progress. The Basotho pony is the natural means transport in this mountainous region.
QwaQwa was re-incorporated into South Africa on 27 April 1994 and is now part of the Free State province. Since that date, the flag has not been in use.
Bruce Berry, 01 Dec 1998 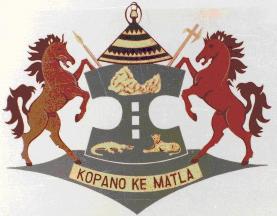 By Government Notice No. 1599, published in the South African Government Gazette (Number 3644 of 08 September 1972) it was notified that a coat of arms had been registered for the Basotho-QwaQwa Legislative Assembly in terms of the South African Heraldry Act (Act No. 18 of 1962).  The South African State Herald did not initially issue a formal certificate of registration in terms of the Heraldry Act in respect of these Arms as they had been devised without consultation of the Bureau of Heraldry. However, following a formal request from QwaQwa, certificate number 1994 was issued on 01 September 1988.

The blazon of the coat of arms is described as:

Following the incorporation of Qwaqwa into South Africa on 27 April 2006, these Arms are no longer in use.
Bruce Berry, 19 Dec 2006