South Africa was suspended from participation in the Olympic Games following the Rome Olympics in 1960 because of its apartheid policies.  Following the dismantling of apartheid, the un-banning of previously restricted political organisations and the beginning of the negotiations which resulted in establishment of a democratic government, the country's sportsmen and women returned to the Olympic arena in Barcelona in 1992.   As the new democratic constitution was still being negotiated, South Africa participated under a special Olympic flag rather than the national flag at the Barcelona Olympic Games.

Following the adoption of the new national flag and the election of a fully democratic government in April 1994, the country has since participated using the national flag at subsequent Olympic Games.
Bruce Berry, 21 Jan 2006

The South African Olympic Flag appears in Flagmaster No.84 as part of a large article by William Crampton on flags at the Olympics. The flag is illustrated at page 36 of Flag Bulletin Vol. XXXI:1/145 dated Jan-Apr 1992 and in the SAVA Newsletter 3/92 dated July 1992. The SAVA article notes that there were two versions of what it described as the "Interim Olympic Flag for South Africa" - an initial design which included the words SOUTH AFRICA and a modified version which deleted the words. It also appeared as a colour illustration in 1992 in a TIME magazine (sorry I don't have a date).
Ralph Kelly, 10 November 1998

On 06 November 1991 the National Olympic Committee of South Africa (NOCSA) announced a flag under which South African athletes would compete in the 1992 Barcelona Olympic Games.  In accepting the invitation to participate in the Games, NOCSA indicated that it "would not be appropriate" to use the (then) existing national flag, springbok sports emblem or the national anthem.  Instead, South Africa would compete using interim symbols.

The interim Olympic emblem comprised a white flag, in the centre of which is a stylised grey diamond representing the country's mineral wealth. Superimposed, in the top left hand corner are the 5 Olympic rings in colour. Starting beneath the rings and sweeping up to the right of the flag are flashes of blue (representing rain and sea), red (for land) and green (for agriculture).  Under this design are the words SOUTH AFRICA in grey.  NOCSA Chairman, Mr Sam Ramsamy, said the flag represented unity and would be used until a democratically elected government was in place.

The government criticised both the decision to use such a symbol as well as its design. However, for most of South Africa's athletes, the chance to compete in the Olympic games after a break of 31 years was the most important concern.  South Africa was represented by this flag at the Barcelona Olympic Games.

There's a quote from Željko Heimer from four years ago on the page about the South African 1992 Olympic flag. It describes that flag as: "The flag of South Africa used on Barcelona 1992 games was, I guess, their national Olympic Committee flag - white with Olympic circles and wing-like shapes one behind the other in Olympic (or if you wish in the new South African) colours."
Peter Hans van den Muijzenberg, 19 July 2000

I found the Symbol of the National Olympic Committee of South Africa, which does resemble the description above. However, I expect the wing-shapes are branches of some kind. Is there someone who knows or can make a good guess about the kind of branches who can make a better description? I understand that the NOCSA's flag includes the letters, while the flag for the 1992 South African team displayed only the logo.

The flag used by South Africa at the 1992 Olympic Games was not the flag of the National Olympic Committee of South Africa (NOCSA). It was an "interim" flag to be used by the team in place of the national flag, since the latter was not considered to be representative of the nation as a whole.  The colours represent rain and sea (blue), land (red) and agriculture (green). These were originally described as "flashes" of colour. The original design for the flag included the name "South Africa" in grey under the logo but this was later removed and the flag carried at the Olympics was white with the logo in the centre sent to FOTW previously.
Bruce Berry, 21 Jul 2000

The NOCSA "House flag" was carried by the South African Olympic Team at the Opening Ceremony of the 1994 Winter Olympic Games in Lillehammer, Norway, as the now-current national flag of South Africa did not come into use until later that year.
Dean Thomas, 27 Aug 2004

The NOCSA symbol has been used since 1994 to represent the Committee. It appears on a white field as the NOCSA "house flag" but it does not have any "official" status and it is not carried at the Olympic Games.  As for the branches, I agree with the earlier posting that they are stylised olive branches.
Bruce Berry, 21 Jul 2000

The South African Sports Confederation and Olympic Committee (SASCOC) is the controlling body for all high performance sport in South Africa and was formed as a Section 21 Company by representatives of all the sports bodies at a general meeting held on 27 November 2004. In terms of the Memorandum of Association, the main object is to promote and develop high performance sport in the Republic of South Africa as well as and to act as the controlling body for the preparation and delivery of Team South Africa at all multi-sport international games including but not limited to the Olympics, Paralympics, Commonwealth Games, World Games and All Africa Games.

- to affiliate to and/or be recognized by the appropriate international, continental and regional sport organisations for high performance sport and for that purpose act as the recognized national entity for the Republic of South Africa;
- to initiate, negotiate, arrange, finance and control where necessary, multi-sport tours to and from the Republic of South Africa inclusive of events between teams and/or individuals;
- to ensure, and if necessary approve, that the bidding process relating to the hosting of international sporting events in the Republic of South Africa or any other events are in compliance with the necessary rules and regulations relating to same;
- to facilitate the acquisition and development of playing facilities including the construction of stadia and other sports facilities;
- to ensure close co-operation with both the government and private sector, relating to all aspects of Team South Africa;
- to ensure the overall protection of symbols, trademarks, emblems or insignia of the bodies which fall within the Association’s jurisdiction.

SASCOC was formed in 2004 following which all the various predecessor bodies were dissolved and their functions, insofar as they relate to high performance sport, were taken over by SASCOC. All other functions which relate to Mass Participation in sport will become the responsibility of Sport and Recreation South Africa.

The Founding Members of SASCOC have unequivocally pledged to unite and commit themselves towards an improved system based upon the principles of equal opportunity, non racialism and non sexism for all persons, and have dedicated themselves to ensuring equitable development at national and representative level, which ensures the implementing of co-ordinated sports procedures and policies, which would ensure elite levels of athleticism, thus allowing delivery of Team South Africa by the pooling of activities, resources, experience and expertise, as well as co-ordinating the preparation, presentation and delivery of Team South Africa to any elite high performance event worldwide. 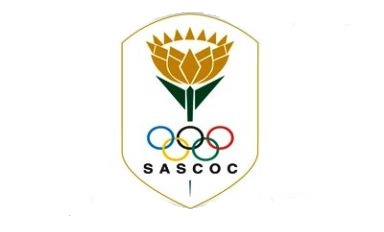 The logo of SASCOC features a stylized King Protea (Protea cynaroides), the national flower of South Africa, in the national sporting colours of green (the leaves and stem) and gold (the petals), above the five Olympic rings with the letters SASCOC in black below.

The logo is placed in a the centre of a white field when used as a flag.
Bruce Berry, 14 May 2016

TheSpecial Olympics is a global organisation that changes lives by promoting understanding, acceptance and inclusion among people with and without intellectual disabilities.  It was founded in 1968 by Eunice Kennedy Shriver to provide people with intellectual disabilities continuing opportunities to realise their potential, develop physical fitness, demonstrate courage and experience joy and friendship.

The logo of the Special Olympics depicts five figures in a unifying circle to symbolise its global presence.  The figures who each have six arms. The arms in the lowered position recalls the time when many people were unaware of the talents and abilities of those with intellectual disabilities- a time before the founding of the Special Olympics.

The straight arms symbolise a greater equality and outreach while the raised arms represent joy and the realisation of ultimate goals.
Bruce Berry 29 Apr 2021 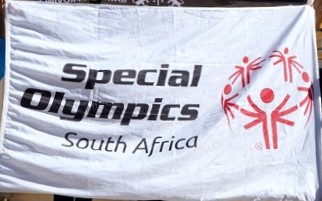