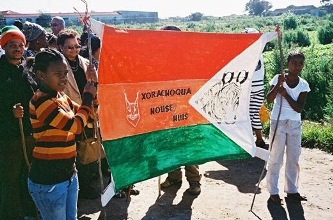 "Khoisan" is a unifying name for two groups of peoples of southern Africa who currently found in north western South Africa, southern Namibia and western Botswana, who share physical and linguistic characteristics distinct from the African Bantu majority of the region. Culturally, the Khoisan are divided into the foraging San (or Bushmen) and the pastoral Khoi, or more specifically Khoikhoi (previously known as Hottentots).

‘San’ as a term came to be used to denote the hunter-gathering communities who did not speak Khoi languages – known to white settlers as ‘Bushmen’ - in contradistinction to the Khoi-speaking herders. However, the term ‘Khoisan’ is a relatively recent invention, coined in 1928 by Leonard Schultze as a collective category for early hunter-gathering and herding peoples of southern Africa, and a term which increasingly causes a degree of tension and controversy. Traditionally, the Khoi Khoi were largely pastoralists, whilst the San lived primarily off hunter-gathering, and hence the differences in their livelihoods, culture, languages and identity make for some significant distinctions between Khoi and San peoples, despite their having some common ancestry and cultural commonalities. Increasingly, some San communities, claiming the ultra-marginalisation of their people, even in comparison to the Khoi Khoi, are beginning to assert a distinct identity, encouraging the use of ‘Khoi and San’ as opposed to ‘Khoisan’ or ‘Khoi-San’ in official references to these populations. Officially, however, the ‘Khoisan’ as an ethno-linguistic group remains a recognised identity.

A detailed background and overview of the history of the Khoisan people can be found here.
Bruce Berry, 29 April 2015

The photograph above carries the caption 'Youngsters carry the flag of the Gorochouqua House for the 2010 restoration ceremony'.  This indicates it could be a flag for the Khoisan as they seek to enhance their identity.
Jason Saber, 19 April 2015