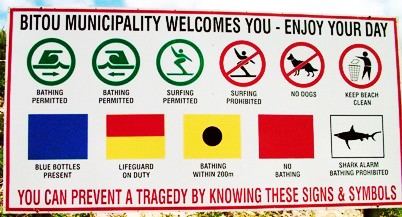 In the vicinity of the False Bay beaches there have been a spate of attacks, some fatal, by Great White Sharks in the recent past. The Cape Town Metropolitan Council has now introduced a shark watch with spotters on the hill sides overlooking the beaches, supported by periodical helicopter patrols, to warn of sharks in the vicinity of the beaches. The shark spotters are equipped with walkie-talkies and report any sightings to the life savers on the beaches.


Warning flags are then hoisted to warn the bathers:

A Green flag indicates that visibility for the spotters is good and that no sharks have been seen.

A Black flag indicates that visibility for the spotters is poor, but no sharks have been seen.

A Red flag indicates that a shark has recently been seen but it is no longer visible to the spotters and that bathing is not permitted.

A White flag charged with a black shark indicates that a shark has been sighted and bathers should calmly and immediately leave the water. The hoisting of this flag is accompanied by a loud siren blast.

If no flag is hoisted, then the spotters are not on duty.

This information is published in a pamphlet available to the public. It contains no information on the dimensions of the flags, but an actual black flag flying seen by me, was about two feet by three.
Andries Burgers, 23 Feb 2007 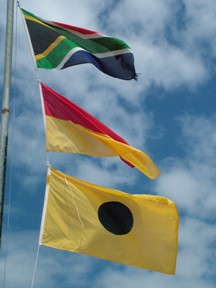 Other municipalities along the South African coast also hoist flags to inform swimmers of bathing conditions.  These flags are indicated on signs at the entrance to the beaches (see top).  In addition to the flags indicated above, there are also the following warning flags:

A horizontal bicolour of red over yellow indicates that lifeguards are on duty.  (Incidentally this is the same design as the former municipal flag of Pretoria).

A plain blue flag indicates that bluebottles are present in the water.

A yellow flag with a black roundel in the centre indicates that bathing is permitted within 200m of the shoreline.
Bruce Berry, 18 Feb 2008