For decades after WW2 Austrian politics were dominated by the two biggest parties, often forming grand coalitions. The two parties were the conservative-christian democratic ÖVP and the social-democratic SPÖ. Since the mid-80ies, however, a smaller party gained more and more electoral support, the FPÖ (Freiheitliche Partei Österreichs / Liberal Party of Austria), led by Jörg Haider. In spite of its name, this party is not "liberal" in the usual sense of the word, but rather a right-populist party with a strong xenophobic undercurrent. The two bigger parties lost more and more support to the FPÖ, so that in the 1999 parliamentary elections SPÖ, FPÖ and ÖVP gained almost exactly the same amount of votes. The result (after a long struggle) was a coalition government of ÖVP and FPÖ under Chancellor Schüssel. This government was renewed after the 2002 elections, that had led to a major success for the ÖVP and a defeat of the FPÖ.
Two other parties have or had seats in the parliament, namely the Greens and a liberal split-off of the FPÖ, the LiF . Beside several smaller, rather insignificant parties, the KPÖ (Kommunistische Partei Österreichs / Communist Party of Austria), is rather active (and rich, by the way), although it was never really successful in elections.

What regards the flags of the Austrian political parties, I don't have much info yet. In the important book by Diem [die95] the logos of the parties are shown, but not many flags. Up to now I only have information on flags of the KPÖ, SPÖ and Grüne. In the WWW I could not find much on party flags, especially because the Austrian parties do not sell party flags in their online shops.

One flag shown in [die95], is red with the old party logo in the center. The party logo was hammer & sickle over the Austrian national flag.

On the KPÖ website there are many photos of demonstrations with flags. However, these photos are rather small and do not show the flags in detail. All of the flags seem to be red, either plain red flags or with some small device. In one case also small paper flags, plain red with white hammer&sickle, were shown.
image1; image2; image3 from KPÖ website

At least one flag can be discerned on several photos. This seems to be the new party flag, as it shows the newer party logo in the canton of a red flag. This logo is the black (fimbriated white) inscription "KPÖ".
image1; image2; image3 from KPÖ website

Several interesting historical flags of the KPÖ and affiliated organizations seem to be in the archives of the
Alfred-Klahr-Gesellschaft. However, they write, that these flags "are not accessible". Some flags are shown there, obviously mostly from the time between the two world wars, including flags used by Austrian volunteers during the Spanish Civil War.
http://www.klahrgesellschaft.at/Fahnen.html
M. Schmöger, 20 August 2003

In Flag Report 37 (unpublished yet) there's an article about communist flags in the world. The KPÖ is, of course, represented. I send to Vexillum-Mailing List two images (photos) where the flags can be seen better. In the article are also mentioned the flags of some related organizations (Gewerkschaftlicher Linksblock, Youths, Pacifist).
I believe that I got some more information from KPÖ provided by Lucien Philippe, but is still in the folder of unclassified material.
The Communist Party was created in November 1919 but forbidden in 1933. It was re-established 1945.
The official flag seems to be the one with a hammer and sickle in the center, but currently is less used that the red flag with logo in canton. I don't know if the flag with hammer and sickle was changed (even if the old flags are yet eventually used) or both are used at same time. I don't have information about the flag bearing the logo with Austrian flag below the hammer and sickle. I have interest in knowing what dates it was used (or if is used currently).
Jaume Ollé, 20 August 2003 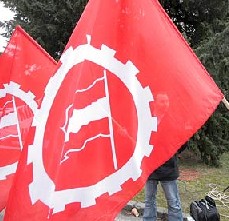 NVA or Nationale Volkspartei (i.e. National People’s Party) is an Austrian party of the extreme right founded in 2007. As is often the case, rightist party flags are rather striking - the urge to impress, visually in this case, is very large. See this page: http://www.krone.at/Oesterreich/Nationale_Volkspartei_darf_in_OOe_nicht_antreten-NVP_abgelehnt-Story-157197.

Red field, within a broad white gearwheel the Austrian national flag in white outline. Of course this item appears on party videos, in some cases drawings show a black gearwheel: http://www.nvp.at/?cat=87. Another example, by the way, of a beflagged flag.
Jan Mertens, 23 February 2011