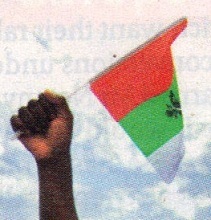 A recent issue of The Economist has a photo of Burundi President Nkurunziza holding a vertical tricolor of red, green and white with a black emblem on the center stripe. Can anyone identify this flag?
Al Kirsch, 27 July 2010

A logo at the bottom of the page suggests that the image on the green stripe is a black raptor holding crossed sword and branch.  The party is nicknamed "The Eagle's Party" or, even, "The Eagle, Cassava and Sword's Party", as a reference to its emblem. The "branch" is indeed a cassava leaf.
Ivan Sache, 27 July 2010

The official website of Uprona (www.partiuprona.org) gives the name of the party as: Parti de l'Unitť pour le ProgrŤs National (Unity Party for National Progress). Moreover, it shows two crossed flags, the UPRONA flag (as above) crossed with the flag of Unitť. This could mean that Unitť and UPRONA have merged, which might explain the change in the full name of UPRONA.

UPRONA is one of the oldest political parties in Burundi. It was founded in 1959 as the Union pour le ProgrŤs National by Prince Louis Rwagasore, the son of the King of Burundi. Most of the members were Tutsis. In 1960 the Belgian colonial administration supported other political parties and UPRONA lost the municipal election. On 18 September 1961, UPRONA won the general election supervised by the United Nations and in October 1961, Rwagasore was murdered.  In 1966, a one-party system was established and UPRONA was the main tool used to control the Hutu population. Colonel Bagaza ruled Burundi with the help of UPRONA from November 1976 to September 1987.  UPRONA was restructured in 1991 (Source: Encyclopaedia Universalis).

from the party website posted by Ivan Sache, 20 February 2005

The white and red flag of UPRONA is also shown on the emblem of the party.
Ivan Sache, 20 February 2005

During its first national extraordinary congress, held on 19 and 20 October 2002 in Bujumbura, the Front pour la Democratie au Burundi adopted its statutes:

"Title 1. General provisions
Chapter 1. Of the name and headquarters
Article 1.
It is constituted in Burundi as a political party for the struggle and consolidation of democracy named Front pour la Dťmocratie au Burundi, with the abbreviated name Parti Sahwanya Frodebu.

Article 2.
The militants of the Parti Sahwanya Frodebu are called Inziraguhemuka.

Article 3.
The motto of the Parti Sahwanya Frodebu is: Democracy, Work, Equity.

Article 4.
The colours of the Parti Sahwanya Frodebu are green, symbol of hope, and white, symbol of peace."

Article 2.
The emblem of the PALIPEHUTU is made of a bent bow and an arrow placed between a hoe and a hammer.

Article 3.
The flag of the PALIPEHUTU is red with in its center a green circle in which is inscribed the emblem of the party in black colour. Red symbolizes the suffering endured by the people of Burundi. The bent bow and the arrow symbolize the struggle for the fundamental rights and liberties.
The hoe and the hammer, whose handles converges, symbolize the commitment in unity to agricultural and industrial development, respectively. Green symbolizes the hope to set up peace, justice and democracy in our country.