Prior to independence on 01 July 1962 Burundi was part of German East Africa. After its defeat in World War I, Germany handed control of part of German East Africa to Belgium. On 24 October 1924 this territory, which consisted of modern day Rwanda and Burundi became a Belgian League of Nations mandate territory known as Ruanda-Urundi and was part of the Belgian colonial Empire linked to the neighbouring Belgian Congo. Following World War II, Ruanda-Urundi became a United Nations Trust Territory under Belgian administrative authority. During the 1940s pressure for local autonomy increased and on 20 January 1959 Burundiís local ruler, Mwami Mwambutsa IV, requested a separation of Burundi and Rwanda and the dissolution of Ruanda-Urundi.  Burundi proclaimed independence on 01 July 1952 with Mwami Mwambutsa IV as king.

The flag adopted at independence consisted of a white saltire which divides the field into alternating red and green areas. The centre of the saltire merges to form a white disc, which contained a Karyenda (drum symbol of royalty) and sorghum plant (symbol of prosperity). When the monarchy was deposed in 1966 the Karyenda was removed from the flag leaving only the sorghum plant in the centre.  The current flag maintains the original design but with three red six-pointed stars outlined in green being placed on the central white disc. The flag was originally adopted in 1967 with the overall ratio of 3 : 5 being set in 1982. The three stars in the centre of the flag officially refer to the three words in the national motto ďUnitť, Travail, ProgrŤsĒ (French for ďUnity, Work, ProgressĒ). The three stars are also said to represent the three ethnic groups who live in Burundi, namely the Hutu, Tutsi and the Twa. The colours represent hope (green), peace (white) and the struggle for independence (red).

The historical timeline of major political events is as follows:

Possible flags used at the time of independence

The source of this flag is very unreliable: If I remember correctly, this flag was redesigned after a newspaper report which said that "in Burundi was hoisted a flag of red, white and green with a Royal drum on it" . So this illustration might be nothing more than a poor reconstruction of the 1962 flag.
Ralf Stelter, 13 Jun 1999


At the World Statesmen website there is a historical Burundi flag as pictured above. The flag is purple with what I presume is a wheat stalk behind a red shield. The shield has interlocking white semicircles. The status of the flag is unknown.
Zane Whitehorn, 11 Nov 2002

At the independence in 1962 until 1966 Burundi used a flag based on the current design but with a drum called the Karyenda, a traditional emblem of the Mwami (king) in the centre. There was also a sorghum plant placed in front of the Karyenda.
Stuart Notholt, 12 Mar 1996

There are also reported variants where the colour of the drum is red and the position of the drum and sorghum is different as shown below.

On independence day, the flag adopted was in the current design but with a sorghum plant and the drum (in red) in the centre. This flag is shown on a postage stamp issued on the independence day. The image above is one of several known variants.
Jaume Ollť, 05 Sep 1998

The king (a Tutsi) appreciated similarity between a red drum and a Hutu axe and ordered the flag to be changed.  The rendition of the drum is also more complex as shown in several books.
Jaume Ollť, 05 Sep 1998

When the monarchy was overthrown in 1966, these symbols were abandoned.
Stuart Notholt, 12 Mar 1996

I have three photographs from 1962 that might tell an interesting story about the design of Burundi's original flag.

The following two photos were taken in the Usumbura before independence: 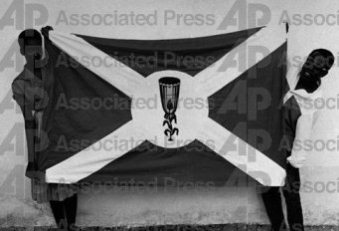 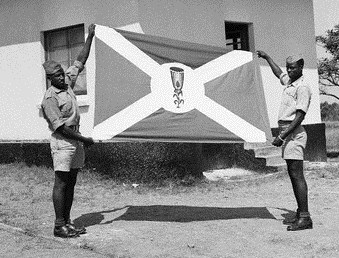 Note that the two flags are almost the same - The drum is tall and detailed and the sorghum plant's leaves are close to the stem. But the second photo's caption says, "Here, two recruits hold the new Burundi flag in a photo made a few days before the 01 July independence became effective. Mwami Mwambutsa, the ruler of Burundi, noticed that the tom-tom in the new flag is more Bahutu than Watusi in design, and has ordered all flags to be scrapped and design to be changed, reliable sources said."

Now look at this photo of the actual independence ceremony in Usumbura:

The design of this flag is different. The drum is shorter and wider with no details, and the sorghum plant's leaves extend out further from the stem. The same design appears on a commemorative stamp a few months later. 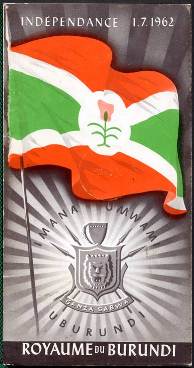 I think this second flag, the one that was raised and adopted on 01 Jul 1962, might be the replacement that Mwambutsa ordered. That would explain the lack of detail ó it would have had to be made incredibly fast to be ready for the independence ceremony ceremony.
Brendan Hennessy, 20 Jan 2013

After 29 November 1966 the monarchy fell and the drum was removed from the flag leaving only the sorghum plant in the centre of the flag.

This period is a bit confused.  According to DGF-Nachrichten (Issue 10) a flag was used without the drum or the sorghum plant for two days between 27-28 November 1966.
Jaume Ollť, 05 Sep 1998

From 1962 until September 1966 the circle in the center of the flag bore the royal drum and a sorghum plant, and from September until November 1966 the sorghum alone.
Nozomi Kariyasu, 12 Jan 2000, quoting from Mucha's Encyclopedia, 1985

Three red stars, fimbriated in green, were added to the centre of the flag in 1967.  The one-over-two arrangement of the stars is illustrated on a postage stamp to commemorate the 4th anniversary of the Republic in 1970.   Although the ratio of the flag was fixed on 27 September 1982 as being 3:5, between 1967 and that date the de facto ratio was 2:3.

The three stars in the centre of the flag officially refer to the three words in the national motto ďUnitť, Travail, ProgrŤsĒ (French for ďUnity, Work, ProgressĒ). The three stars are also said to represent the three ethnic groups who live in Burundi, namely the Hutu, Tutsi and the Twa. The colours represent hope (green), peace (white) and the struggle for independence (red).
Jaume Ollť, 05 Sep 1998

On 28 July 1967 the fimbriated stars were added to the flag. This flag is shown on a 1967 postage stamp  to commemorate the first anniversary of the republic with stars arranged two in the upper part and one in the lower part.
Jaume Ollť, 05 Sep 1998

Burundi's flag was never with two stars on top. The image on the postage stamp is incorrect.
Ralf Stelter, 09 Dec 2000