Fort Saskatchewan, Alberta (population: 14,685). A major petrochemical industry in the area is represented by the gear wheel.
Darrell Neuman, 4 May 2006

I would hazard to guess the hexagon represents the petrochemical industry (a benzene ring) while the Mountie represents the historical fort.
Rob Raeside, 4 May 2006

The small flag held by the Mountie is the traditional RCMP lance pennon which is a feature of the RCMP Musical Ride, as noted at the RCMP site.

One of the most recognizable Musical Ride formations is the "Dome," once featured on the back of the Canadian fifty-dollar bill. The highlight of the Musical Ride is, without a doubt, the CHARGE when lances, with their red and white pennons, are lowered and the riders and their mounts launch into the gallop.

Fort Saskatchewan is still listed as an RCMP detachment. But it is far smaller than the original detachment which established the fort (and later moved to Edmonton as "K" Division).

The triangular pennon of the North West Mounted Police (i.e. RCMP) was red and white. It appears to have originated in the March West during 1874. The Q&A page on the Musical Ride notes:

on November 21st 1921, with the approval of King George V, a Canadian proclamation assigned red and white as the official colours of Canada. Consequently, on ceremonial occasions, we could hold no more appropriate colours aloft on our lances. 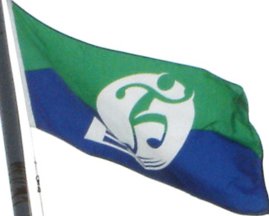 Darrell tells me that he doesn't have different images at his disposal, but that the logo appears on all their stationary. Implied seems to be that on the flag of the Dow Centennial Centre Flag is indeed the logo of the DCC. It would appear that the same logo can be found at http://www.fortsask.ca/dowcentre.
Peter Hans van den Muijzenberg, 10 July 2013