Mundare is host to The Basilian Father's Museum that presents the history of the Ukrainian settlement and Basilian Fathers Mission in east-central Alberta. It holds a unique collection of 16th and 17th century liturgical books from the Ukraine. The museum is off of the highway 45 that borders the eastern part of town and is across from the "Grotto" an elegant garden and shrine that was built by the Basilian Fathers in 1934.

It is also home of the world's largest garlic sausage (Kielbasa or Kovbasa), which cost about $120,000 to build and erect.

A picture of the statue (for those interested) is at bigthings.ca

About the sausage statue (somewhat flag related) from bigthings.ca

Built in recognition of Stawnichy's Meat Processing, a sausage factory which has been in Mundare for 50 years and is famous for their Keilbassa (Ukrainian sausage).

The Sausage cost about $120,000 to build and erect. It was four years in the making and was built to withstand 160 km/h winds.

It is surrounded by four flags (Canadian, Alberta, Mundare's, and the Stawnichy Flag).

Photos of the flag: 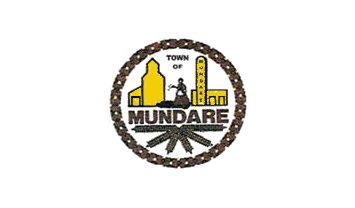 The [former] flag of the Town of Mundare, Alberta (population: 750) which features a grain elevator (name MUNDARE spelled vertically down it), water tower, wheat and a female homesteader planting seeds.
Darrell Neuman, 13 May 2006