This comes from a book of water-colour sketches made in 1862, and called 'Corrected Code of Merchant's Signals'. It is on a page headed 'National Flags' and captioned 'Government House, St John's.'

A Union Jack would have been the usual flag to fly on Government House, but there are one or two references to distinguishing flags for colonial governors in the 1860's, before the introduction of defaced Union Jacks in 1870.

In a dispatch dated 20 April 1870 the Governor of New South Wales wrote to the Colonial Office that he would discontinue use of a "Governor's Flag" which was described as, a St. George's Cross with crown in the centre on a white ground. One might assume that it would have been a Royal Crown rather than the antique crown drawn on the St John's flag. The latter may have been just a stylized crown and not an accurate depiction of the appearance of the crown on the flag.
David Prothero, 9 January 2003


The Governor of British Columbia, wrote to the Colonial Office on 17 May 1870 that:

The badge is the crest of the Royal Arms, a lion on the crown. I must however observe that the utility of the change proposed appears to be doubtful. The flag hitherto authorised for use by the Governor on ship-board, or in boats, is a white flag with a crown or arms of the colony in the centre, and was known to be personal to the Governor; and could not be mistaken for an Admiral's flag. But Union Jack has always been flown at Government House and Public Buildings and Forts, in every colony in which I have resided, as the National Ensign.
[Public Record Office document CO 60/38]

The only official reference that I have found to pre-1870 governor's flags was in the 1862 edition of Queen's Regulations & Admiralty Instructions. The section dealing with Ceremonial and Distinctions was included with a Colonial Office Circular of 17 Oct 1862. V - 4.

… said Union Flag or Jack is not on any account to be displayed at either masthead of any ship or vessel in consequence of any Governor, or Lieutenant-Governor, of any of Her Majesty's possessions or fortresses being on board such ship or vessel; but a Flag having a crown on it, or having the Arms of the Colony on it, may be substituted to denote the presence of the Governor, or Lieutenant-Governor, on board any vessels in the precinct of his Government.
[PRO document CO 854/7]

From 1918 to 1965, Newfoundland flew the British Red Ensign, with the badge of the province/dominion on the fly. (As A Merchant Ensign)
David Prothero, 9 January 2003

The British derived flags of Newfoundland differ from those of other Canadian provinces because Newfoundland did not join the Canadian confederation until 1949. Thus the garland on the flag of the governor was laurel not maple, the badges also appeared on Blue Ensigns, and the Red Ensign was a merchant ensign, and not a provincial land flag like those of Ontario and Manitoba.

19 Jan 1870. The Governor, Steven Hill to Earl Granville, Secretary of State for the Colonies;

Responsible Advisors propose that the Arms of Newfoundland be used as a badge to distinguish the flag of the colony under my government. Wax impression forwarded for approval of your Lordship.

The arms granted to Newfoundland in 1638 had been forgotten and were not reinstated for another 55 years. The reference to the wax impression makes it almost certain that, like Prince Edward Island, it was the Seal of the Colony that was being proposed. Somewhat surprisingly the design was approved by the Colonial Office and Admiralty.

However in Newfoundland the matter was reconsidered and on 15 July 1870 Hill wrote to Granville that "Government of Newfoundland propose that design now forwarded may be substituted for that of 19th January."

This was, a crown and words Terra Nova on a white disc, that was to appear on the Governor's Union Jack and the government Blue Ensign.

On 20 Sep 1870 the Secretary of State for the Colonies, who was now Earl of Kimberley wrote:

For consideration of Lord Commissioners of Admiralty the drawing of a flag which government of Newfoundland have requested may be substituted for the design enclosed in my letter to your department 29th January which I had concurred.

The new design is much less elaborate than the old. With Lordships concurrence Kimberley will accede to request.

At the beginning of the 20th century there was a trend towards somewhat simpler and more appropriate badges than the local/allegorical scene from the seals of colonies. However Newfoundland took the opposite course and replaced its crown badge with the allegorical scene from the seal that had, in 1870, been proposed and then withdrawn. It was approved 18 May 1904. According to Alistair Fraser the change was the work of Adelaide Lane the niece of the Governor Sir Cavendish Boyle.
David Prothero, 9 January 2003

Mirror image of photograph of female die of 1839 Great Seal Deputed of Newfoundland. From Canada : Symbols of Sovereignty by Conrad Swan. 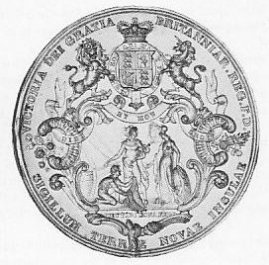 
The lower part of the seal within the elaborate framework was expanded to a circular form for the 1904 badge, which appeared on the Governor's Union Jack and government Blue Ensign. Newfoundland was granted Dominion status in 1917 and the same badge was approved for the Red Ensign 25 October 1918.

In 1924 an enquiry from the Imperial War Graves Commission, which was responsible for memorials to members of British Empire forces killed in the 1914-1918 war, led to the discovery that arms had been granted to Newfoundland on 1 January 1638 (new style), and later forgotten. They were confirmed and certified by Garter King of Arms 18 February 1925, though apparently not officially revived until 1 January 1928.
David Prothero, 9 January 2003

Although its international relations were still handled by Britain, Newfoundland had Dominion status and a National Flag Act was passed that became effective on 15 May 1931. It was originally intended that there should be three national flags, but this was amended to just one, the Union Jack. The circular badge on the governor's flag and ensigns was retained and not replaced by the shield of the arms. There was no section on penalties for misuse of flags, as the Statute of Westminster, a British Act that gave legal form to the Balfour definition of Dominion status, had not been enacted, and the British Commonwealth Merchant Shipping Agreement (1931) had not been signed. Any instances that arose would have been dealt with under the 1894 Merchant Shipping Act. [Public Record Office DO 35/130/8]. In 1933, owing to world depression and inability to meet interest charges on Public Debt, the Legislature asked the King to suspend the constitution and appoint Commissioners. They took office in 1934 thus ending Dominion status.

After the 1939-1945 war, in a referendum held to decide Newfoundland's constitutional future, just over 52 percent of those voting favoured union with Canada, and this took effect 31 March 1949. It had no immediate effect on the flags in use, and the Revised Statutes of 1952, Chapter 272 retained the Red and Blue Ensigns, and reaffirmed the Union Jack as the 'national flag'. The ensigns were discontinued in 1965, when Canada adopted its current flag, but the Union Jack continued to be the provincial flag. While this was satisfactory in Newfoundland, it caused problems when flown on the Canadian mainland. It was not generally recognised as the flag of Newfoundland, but taken to be either the flag of the United Kingdom, or the Royal Union Flag. This was also a Union Jack, that had been adopted as an official Canadian flag on 18 December 1964. The present provincial flag was chosen by the House of Assembly on 28 May 1980, given royal assent on 6 June, and first raised on 24 June, the anniversary of the discovery of Newfoundland by John Cabot in 1497.
David Prothero, 9 January 2003

The shield of the arms appeared on the Lieutenant-Governor's flag on 31 January 1987. The 1904 badge had continued in use until this time, encircled with standard colonial laurel leaves until the mid-1970's, and by maple leaves after that.
David Prothero, 1-9 January 2003

The St John's flag was in an article entitled The Signal and Commercial Flags of St. John's, Newfoundland c. 1500-c. 1900 by Mark A.B. Le Messurier, in North American Vexillological Association's Journal Raven Volume 7 -2000. Author's own sketch of flag, reproduced in black and white with description, 'old English Flag with yellow crown centred', taken from unpublished hand-illustrated watercolour chart made by John B.Ayre, a prominent merchant, in 1862.

1. Union Flag or Union Jack is hereby declared to be the National Flag of the Dominion of Newfoundland.

2. National Colours shall be taken to mean a Red Ensign with the Union in the upper canton next the staff with the badge of Newfoundland (as described in the accompanying schedule) emblazoned in the centre of the fly on a circular white ground.

3. Union Flag with the badge of Newfoundland (as described in the accompanying schedule) emblazoned in the centre thereof on a circular white ground surrounded by a green garland shall be flown by the Governor, Lieutenant-Governor, or other Officer Administering the Government when embarked in a ship or vessel.

4. A Blue Ensign with the Union in the upper canton next the staff with the badge of Newfoundland (as described in the accompanying schedule) emblazoned in the centre of the fly on a circular white ground shall be worn by all vessels which are in the official service of His Majesty's Government in Newfoundland. When such vessels are armed they shall also wear a Blue Pendant with the red St George's Cross on a white ground in the upper part of the pendant next to the mast.

5. The proportions of design and position of Badges upon Flags shall be in accordance with the sealed pattern to be approved by His Excellency the Governor in Council and is to be kept in the Department of the Colonial Secretary.

The badge consists of a representation of Mercury, the God of Commerce and Merchandise, presenting to Britannia a Fisherman who, in a kneeling attitude, is offering the harvest of all the sea; all as described in the Great Seal of the Colony. Above the device in a scroll are the words ' Terra Nova ', and below the motto ' Haec Tibi Dona Fero '
David Prothero, 9 January 2003