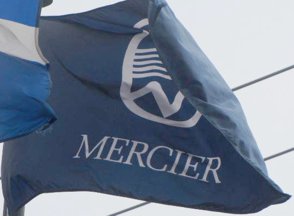 Mercier was founded in the early 19th century as the village of Sainte-Philomčne. Two youngsters from the village were deported to Australia following the 1837-1838 uprising; the village, however, was not burned down, probably because the English merchant John McDonald hold a mortgage on most of the houses. The municipality of Sainte-Philomčne was established in 1855. The village progressively increased, thanks to the set up of a railway station in the 1880s and of the Honoré-Mercier bridge to Montreal in 1934. In the 1960s, the church questioned the historicity of St. Philomčne, the town's namesake. Upset, the inhabitants decided to modernize the name of the town, which was renamed Mercier on 17 August 1968, for Honoré Mercier (1840-1894), Prime Minister of Québec in 1887-1891.

The flag of Mercier is blue with the municipal coat of arms and the name of the municipality below, all in white.
http://www.waymarking.com/waymarks/WMF3Z5_Drapeaux_de_la_ville_de_Mercier_Qc - Photo contributed to Waymarking, 19 August 2012

The coat of arms of Mercier was designed in 1974 by Gilles Charbonneau. The shape of the shield, both traditional and modern, comes from the letter "O" of the "Melior" font, used for "VILLE DE MERCIER". The rose conveys the idea of a non-polluted place, green environment and purity. It also recalls lord Antoine Le Moyne de Châteauguay, whose arms include three five-petalled roses. The rose is stylized to highlight the modernism and evolution of Mercier, and slightly slanted to express the idea of sensibility associated with the rose. The two leaves are placed closer to each other than on a real rose to highlight the hospitality of the inhabitants of Mercier. The wavy lines represent river Châteauguay that limits Mercier. The river played a significant part in the establishment of the first colonists in the region. The double chevron is a reference to lord Le Mercier, whose arms included a chevron (but only one). It forms a letter "M" for "MERCIER" and recalls the sand dunes located on the municipal territory.
http://www.ville.mercier.qc.ca/01_portrait/symboles.asp - Municipal website
Ivan Sache, 20 March 2013