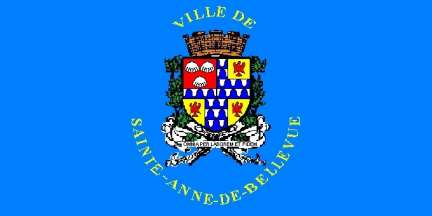 I took a photo of this flag in 1999 in a Montreal Urban Community building. The lettering however was bigger, which is confirmed by a photo reported to me by Marc Pasquin.
Luc Baronian, 9 May 2005

The Town of Sainte-Anne-de-Bellevue (5,381 inhabitants in 2008; 1,120 ha) is located at the western tip of Montreal Island. The town was named for a church dedicated to St. Anne, and for the feudal domain of Bellevue.

The coat of arms of Sainte-Anne-de-Bellevue is "Or a cross vair cantonned with four alerions gules a canton of the same charged with three scallops argent." The shield surmounted by a five-towered crenelated mural crown. The shield supported by two leaved branches of maple proper crossed per saltire and tied gules. Under the shield a scroll argent inscribed with the Latin motto sable "OMNIA PER LABOREM ET FIDEM".

The cross recalls that St. Ann was Jesus' grandmother. The shells and the alerions are taken from the arms of François de Montmorency-Laval (1623-1708), first Bishop of Quebec and founder of the St. Louis mission, the remote origin of the town. The shells in the quarters are also recalling the name of the Jacques-Cartier County [this is quite far-fetched: scallops are called in French "coquilles Saint-Jacques" - St. James' shells, while a quarter is a "quartier", homophonic with "Cartier"]. Vair comes from the arms of François-Saturnin Lascaris d'Urfé (1641-1701) (see Baie-d'Urfé for more details). The motto means "Everything Through Work and Faith".

Research, design and drawing of the arms were performed by the Collčge Canadien des Armoiries, Montreal.
- http://www.ville.sainte-anne-de-bellevue.qc.ca/Ville.aspx - Municipal website