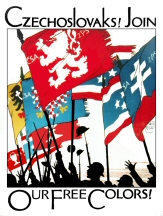 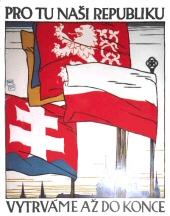 There is a flag that I do not remember being discussed here, shown on a Czech stamp of 1998, looking like a "federation of Thailand and Micronesia" flag. This is what Graham Knight says about it on that site: "The stamp depicts a World War 1 recruiting poster used in the USA and it shows various contemporary Czech and Slovak flags. The red flag with the rampant lion is a banner of the Bohemian coat of arms. Behind are 2 examples of the Resistance flag (five horizontal stripes - red, white, blue, white, red, the blue being of double width). This  flag was designed by V Preissig for Milan Stefanik, a Slovak Nationalist member of the National Council which the Allies had recognised as the Czechoslovak government in exile. The flag was  identified with the National Council but was not adopted as the national flag when the National Committee declared the independence of Czechoslovakia on 28 October 1918 in Prague. The other flags not shown in full include, at furthest right, a Slovak flag depicting the Slovak arms, a double cross in white. These arms were taken from those of Matica Slovenska, a Slovak patriotic society, which had taken them from "Hungary Modern", the dexter part of the arms of Hungary. One of the flags furthest to the rear shows a black eagle's wing-part of a banner of the arms of Silesia which depict an eagle (Silesia formed the Czech lands along with Bohemia and Moravia.) In front of it is a banner of the Moravian arms-a red and white chequered eagle on a blue field. I cannot identify the flags placed behind these flags."
Graham Knight.

The flags, apart that of the National Council, are BOAs of 4 components of Czechoslovakia: Bohemia (white lion on red), Moravia (white and red checquered eagle on blue), Silesia (Back eagle on yellow) and Slovakia (white cross on a  mountain on a red over blue field)"
Jean-Francois Blanc.

This stamp was released in 1998 (80th anniversary of foundation of Czechoslovakia) and as mentioned, motive is from recruiting poster used in the USA (WW1 - prob. 1917). The unidentified flags on the stamp are probably Hussite war flags. Here is most used flag - white chalice in red field. This flag was used by Jan Zizka z Trocnova, but others Hussite leaders have their own modifications of this motive, e.g. red chalice in the black field or red chalice with small black cross in the white field.
Marek Hlávka, 28 Aug 2000

Formerly we showed a Czech postage stamp with this same image, but very degraded. The original is a WWI-era English-language Czechoslovakia propaganda poster which Nozomi photographed, showing a proposed CZ flag (1:1, resembling the last of the Isidor Zahradnik proposals among banners of arms of the regions of CZ, with small abbreviations added to denote units. I don't know if these were ever real colors or were merely intended to be symbolic, so I'm not giffing them, but if anyone is interested I've cleaned the poster up and uploaded it to <http://en.wikipedia.org/wiki/File:Czechoslovakia_WWI_poster.png>, and a small version is attached to replace our previous image.
Eugene Ipavec, 25 Aug 2009

Another WWI-era poster, this one captioned in Czech and showing two BoAs which are probably symbolic? and the white/red flag we already have.
The slogan reads "for our republic - let us persevere to the end".
Eugene Ipavec, 29 Aug 2009 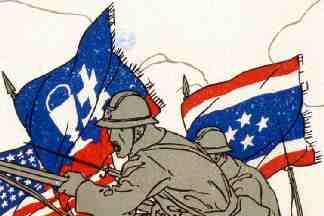 I've found some interesting/strange flags on the online digital collection of the Library of American Congress:
The flags of the Czech Republic and Slovakia in 1918 here. The one at the right is the 4-star flag.
Alex Danes, 12 Jul 2008

I checked out some references to Sokols and found this postcard with two flags, one similar to yours. The other is like Holland's tricolor. The card doesn't say who is what. It's a card for a Gymnastic Festival of the Sokol Union of America, in 1921.
John Udics, 13 Jul 2008

The CZ flag shown only has four stars as far I can tell, though all three examples in the poster are partially obscured. The 4 stars represent Bohemia, Moravia, Silesia and Slovakia. Later proposals contained 5 stars, adding Ruthenia.
Stripes are 1:1:4:1:1, fringe on fly end only.
Eugene Ipavec, 25 Aug 2009

banner of arms of Bohemia

The chalice BoA is missing from the second poster. By modifying a fair bit the Wikipedia CoA of the Czech Republic, here are the relevant banners. I've omitted the unit abbreviations; they were only visible on two flags anyway, and are not present on the second poster at all.
Eugene Ipavec, 29 Aug 2009

This is the banner of arms of Bohemia (also horizontal white over red flag)
John Udics, 30 Aug 2009

banner of arms of Slovakia

banner of arms of Moravia

banner of arms of Silesia