The German East Africa Company was an organization established at the start of the German colonization of East Africa. This company, in short, was responsible for the governing and development of the region for the Second Reich. It had, naturally both positive and negative effects in the region, and was unpopular with the native population.
In 1891, native rebellions made it apparent that the Company could not handle its African dominions, and it lost its monopoly to the German government which began to rule German East Africa directly, thus relegating the Company to running some plantations and trade business.

The Society for German Colonization

After World War I, the 1895 German East Africa Company flag became the symbol that unified all neo-colonial institutions and organizations. Carl Peters was a founder of the Society for German Colonization (Die Gesellschaft für deutsche Kolonisation) and he personally designed the 1895 DOAG flag. The Peters Flag (Petersflagge) became the common model for colonial societies in the period of the Weimar Republic. It was perhaps the most popular among all German colonial flags, but Peters' ill-treatment of the indigenous people ended his career.
Text modified from Pete Loeser: Historical Flags of Our Ancestors

I believe the German East Africa Company had a white flag with a black cross on it. The canton was red with a constellation of five white stars resembling the southern cross set at an angle.
Stuart Notholt, 15 February 1996

Mark Sensen illustrated the 1895 German East Africa Company Flag with a different star-pattern than the flag auctioned by Lot-tissimo. I would say these don't have the same pattern. Is there a reason for that?
Peter Hans van den Muijzenberg, 17 July 2022

Probably, because our earlier illustration is wrong. The contributor hasn't given any source and we now have photographic evidence. I suggest we replace the image and reconfigure the stars.
Klaus-Michael Schneider, 23 July 2022

But which design is correct? This newly discovered example runs against any I've seen used on replica DOAG flags in the past. Usually the Southern Cross illustrated has one of the stars smaller than the rest (usually the middle right one), but I've never seen the third lower star moved that far to the left of the other two right-hand stars in the pattern. Are we sure the flag auctioned is authentic? There have been many other historic German flags of the late-1800s and early-1900s counterfeited. The auction house doesn't seem to include any information about how the flag was authenticated. In fact, the auction house has no longer published any information about it at all except naming it and indicating it sold.
I think we should be cautious and just indicate that various star patterns and sizes were used over the years and many of the flags were unique and differed in detail. Maybe include some of drawings of some variants?
Pete Loeser, 23 July 2022

It seemed to me the flag on photo was made of linen, and thus it is very old, and seems not to be a replica, but who knows?
Klaus-Michael Schneider, 23 July 2022

Perhaps all of the variations were correct. If one looks at the patterns that existed, and were used, for the U.S. flag and the Canadian Red Ensign in the 19th century as a result of less than iron clad patterns, the truth may boil down to who made the particular flag.
Michael Halleran, 23 July 2022

It strikes me that there was never a definitive design (a legally established pattern or whatever), and that (as has been suggested before) we show all the variants.
Christopher Southworth, 24 July 2022 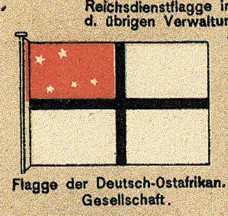 Since the auction house photo and the German flag book show the stars tilted we will go with that for now.
Pete Loeser, 24 July 2022

This lesser known version of the flag of the German East Africa Company was used from about 1885 until the company adopted its more popular and well-known Carl Peters flag of 1895. Our drawing shows five-pointed stars, but they may have been four-pointed.
See the German Colonial Society Variant (after c1939) for an example of a DKG flag using stars with four points.
Text modified from Pete Loeser: Historical Flags of Our Ancestors