It is a red-white vertical bicolour. The coat of arms is shifted towards the top.
Source: this online catalogue
Klaus-Michael Schneider, 12 Sep 2022 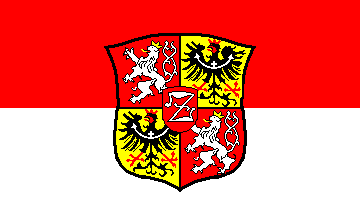 It is a red-white horizontal bicolour with centred coat of arms.
Source: this online catalogue
Klaus-Michael Schneider, 12 Sep 2022

Shield quartered; 1st and 4th quarter Gules a double queued lion rampant Argent, crowned, armed and tongued Or; 2nd and 3rd quarter Or an eagle Sable, crowned, armed and tongued Gules and upon his breast a crescent recumbent Argent in centre connected with a crosslet of the same.
Meaning:
The unsettled mountains between Böhmen (Bohemia) and Oberlausitz (Upper Lusatia) were colonised since 1200 and villages were established by forest clearance. Zittau had been one of them and was called a town in 1250 and a city in 1275. Name giver had been the Lords of Zittau, whose seat had been a local castle. They were mentioned in 1238 as vassals of the Kings of Böhmen, but they and their castle disappeared without a trace. Only a cadastrial section called Burgberg is reminding on them. In 1255 Zittau gained the title of a royal city and a new town (German: Neustadt) was added. Until 1300 the city was walled and had a mint. Zittau became a member of the Alliance of six Upper Lusatian Cities in 1346 and was dislodged from the Bohemian kingdom. It had a city constitution in 1362. The local bailiwick was acquired in 1412, the local cognisance in 1422. Clothers made the city rich during the following decades. In 1547 the alliance was punished by later King Ferdinand I and sentenced to give away its estates and privileges. But they all were regained and the land ownership of the city was even extended. In the 18th century more than 37 villages belonged completely or partially to Zittau. Supported by assets from Hamburg and Nürnberg linen weaving flourished. In 1729 there had been 6250 looms in the villages around Zittau. In the city the cloth was refined, bleached and traded. In 1635 the city had been acquired by the Electorate of Sachsen and became the 2nd Saxonian commercial town besides Leipzig. In 1757 Prussian magazines were destroyed by Austrian artillery and 75% of the city were destroyed by fire within a few hours. Some 80 years were needed for rebuilding the city. The inescutcheon in Bohemian tinctures had been the actual coat of arms of the city at least until the 16th century. It was found on border stones and city gates and rolls of arms. The lions are alluding to the elevation to a royal city by King Ottokar II of Böhmen in 1255. The eagles are referring to the Silesian Dukes of Jauer, to whom the city belonged since 1320, finally since 1347.
Source: Bensing et alii 1984, pp.514-516
Klaus-Michael Schneider, 12 Sep 2022

It was a yellow-red vertical bicolour. The coat of arms was shifted towards the top.
Source: this online catalogue
Klaus-Michael Schneider, 12 Sep 2022

Shield Gules a stag salient Or, chief Argent, base Vert.
Meaning:
The arms are canting, showing a stag (German: Hirsch) on a field (German: Feld), represented by the green base. The stag already appeared on local seals since the 16th century. The pattern variied in details, the field was replaced by mountains and additional firs since 1892. Otto Hupp painted the stag red armed Or on a green mount.
Source: Ralf Hartemink´s webpage
Klaus-Michael Schneider, 12 Sep 2022